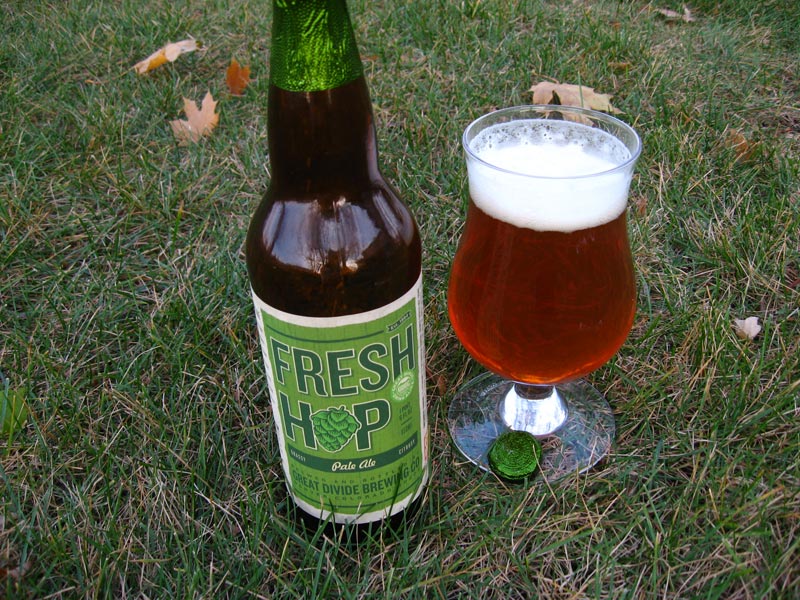 The bookstore I started at on Oct. 4th is finally open for business, meaning my schedule has become a little more consistent. For a while I was pulling 9-13 hour days in preparation for our grand opening. That said, I’m still on a Fresh hop, Wet hop, Hop Harvest (or whatever you want to call it) beer kick. I figure these beers only come around once a year so why not stock up and enjoy the bounty while the hops are fresh.

After trying Founders, Three Floyds, and Port Brewing’s offerings happened upon a bottle from Great Divide. Having enjoyed their Titan, Hercules, and Rumble IPAs, this beer seemed promising…not to mention the packaging looks awesome.

Upon pouring the bombers contents into my tulip glass there appeared a familiar clear orange-pale hue that produced a substantial head which laced as I drank. Common to most Wet hopped beers, the nose was gloriously hoppy, yet non-aggressive. Smooth and mellow, while lending a very noticeable hop presence. As stated before the bittering capabilities of “wet” hops is less than that of “dry” hops which allow the drinker to experience the flavor of the hop aside from it’s bitterness.

The aroma was first off piney and earthy. I’m not sure as to the amount of fresh hops used, but the hop quality was definitely akin the previously aforementioned beers. Taking a deeper waft I got a very floral and sweet character that did possess a “fresh” pop if you will. I’d say that this beer was more pungent and piney than citrusy although there were some hints of orange and clementines.

Drinking this hoppy Pale Ale was no doubt a treat. Resinous at the finish, light mouthfeel, and similar mellow hop profile as compared to other fresh hop brews. I will note that it is more herbal, piney, and earthy that the others I’ve reviewed. This did affect the overall “fresh” aspect to the beer as I didn’t feel like I got enough of the “fresh” hop goodness. It seemed over powered by the bitterness aspect. A great beer that is easy drinking at 6.1% abv and provides a deeper exploration into the world of hops.