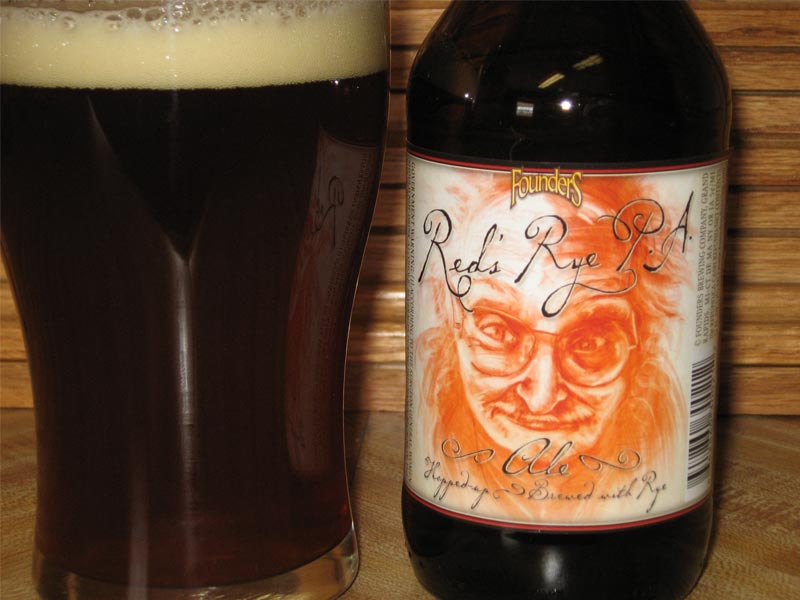 Tom: On the heels of the Pliny the Elder review, allow me to introduce a beer that is also hopped-up and bursting with grapefruit. As I read Nate’s findings I could identify all too well with his comments having just sampled my beer. Founders Red’s Rye P.A. is a bold, fruity brew that commands attention and invigorates the senses. Being completely honest, I am literally one 1% shy of putting this in the A+ category (along with not wanting to be “that guy” who hands out too many).

From popping the lid to the final sip, this Rye P.A. was brilliant. To me, this seems like an IPA at its core and incorporates a “generous addition of rye malt.” Pretty straight forward and appropriately named I’d say. Now on to the good stuff…

During the pour I found myself salivating from the citrus notes that flood my senses. If you are a fan of grapefruit this beer will defiantly appeal to you. The color was a bright ruby red that was very eye catching (topped with a reddish/tan two finger head). The dry-hopping of Amarillo hops was enveloping and fragrant. As compared to the Ranger IPA I had earlier this week, I found this variety of hops suited my taste better. There where also hints of orange, lemon, and peach. The malts were not to be counted out. Founders used 4 Belgian caramel malts that contributed a solid foundation. The rye malt provided an extra kick to the aroma and spiciness to the taste (rye malt does not taste like rye bread).

The bitterness was welcoming and lasted throughout the entire sip. Although it was bold, it was not a harsh or aggressive. It left my palate clean and satisfied. The hoppiness and spiciness from the rye made the finish snap. I was left with a light hint of caramel and a resiny grapefruit aftertaste. This is an amazing beer. It will please those who love their hops and should excite the malt lovers with interesting rye notes.

I brought some to my parent’s house for the gold metal hockey game. My mom had a sip and said, “Wow I can really smell the grapefruit” and “this is probably the best beer I’ve tasted yet!” There you go folks; it has Mama Smiles’ endorsement.

John: Poured a hazy red color with efflorescence and a 1 finger head that turned lacy with lots of sediment in the glass. Subtle bouquet of hops, florals and grapefruit with a bit of rye in the background. The flavor was dominated by hops and bitterness. I like this beer. The rye malt gives it a nice, spicy, crisp finish. The mouth feel is medium. Not thin or creamy, somewhere in the middle. Since I love pale ales I’ll add this to my list of PAs to drink even if a tend away from ryes. The ABV turns this into a sessionable beer.