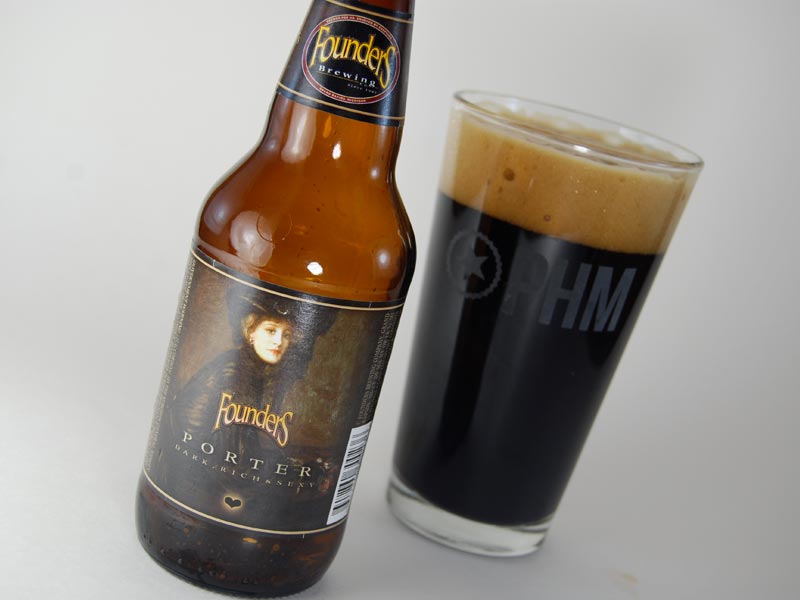 Michael:  A simple name, practically boldly so. No barrel aged, no catchy alliteration, just plain porter. But this one from Founders is anything but a run-of-the-mill brew. Again, upon suggestion of one of the beer guys at the local liquor store, I am sampling a porter, not one of my usual favorite styles. After the Sinebrychoff, which was dubbed by this particular beer guy, as the best import porter, I was looking very much forward to Founders version of the same style as it had been acclaimed as the best domestic porter on the stores’ shelves.

The pour was big time, oily black, thick and viscous, again seeming cloaked more as a stout than a porter. There was a lovely two finger head, solid and proud, leaving traces around the rim of my glass in a picturesque lace. The scent brought reality back, this is indeed a porter with a rich, nutty, malty aroma. There was light coffee notes and waves of caramel as well.

The mouthfeel was the instant show stopper. I hardly tasted it at first, as it went down so smooth and easy. There was an initial sweetness, a very light syrup almost, that got roastier and more bitter as it swirled around in my mouth. There was definitely a burnt finish which aided in creating a cleansing, refreshing feel, surprising and welcome for a beer this dark, rich and sexy (or so says the label).  Grade: A

Tom:  This is a huge porter, yet so elegant and simple that it baffles the mind.  I had sampled this beer years before I started comparing various breweries interpretations on a given style.  Not only does this hold up to English Porters, but might take the cake as America’s best in this style.  The presentation is inviting – billowing tan head atop a old oil black liquid.  Held up to the light you will find garnet edges.

The aroma is rich, deep, and roasted.  Bready oatmeal notes were the first to hit my nose.  I kept thinking I was smelling their Breakfast Stout minus the uber chocolate nose.  Michael was right on in his review when he said this could be a Stout.  It is just shy.  Maybe this is what a Stout Porter tasted like in the old world before the two styles separated?  In any case, the smell is luxurious.  As the beer warmed I did detect a slight charred wood/campfire aroma which complimented the malts notes.

Te taste is dead on.  Thick, creamy, silky, yet not overtly heavy.  Huge roasted grain qualities added that signature coffee finish and aftertaste a Porter should have.  The oily oatmeal aspect gave some dept in the mouthfeel while tip-toeing the line of being a Stout.  The hops are noticeable as they lend an herbal somewhat spicy kick to the finish.  Definitely a great brew that offers a ton of flavor and character.  I agree with Michael’s assessment.  Grade: A