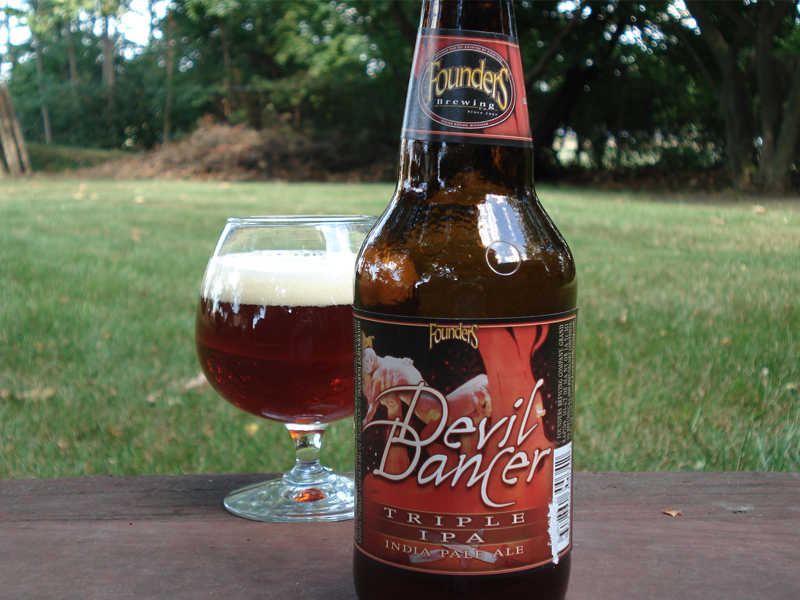 Fresh (2010):  $22.99 for a 4 pack, but I would argue that Devil Dancer is worth it.  You can enjoy one, age one, sell one, and share one.  I was on my screen porch when I cracked the bottle open and poured.  Even with a mild breeze outside all I could smell was a giant blast of hops (so much so I sneezed).  This is a massive beer!  Basically, it is an uber-imperial red ale at first glance and smell.  The rudy red color was close to a clear cherry lambic making it pleasant to look at.

My freshly poured glass delivered a big boozy, piney, resinous, grapefruit salvo.  While the abv was right there in my face the hops and malt did a good job of trying to hide the 12% heat.  Very pungent, the resins and oils completely invaded my nose as I tipped the glass back to sip.  I thought it was going to be like drinking fire and brimstone from Hell itself, but the flavors surprised me greatly.  Spicy and complex I thought it could have almost been a hoppy barleywine (maybe with some age).  The malts have a nice imperial red ale quality with just enough caramel sweetness to protect this beer from being all hops.  There is a slight nutty somewhat toasty flavor which lends some depth.  The hops!  Well, bold and spicy they do not let your taste buds retreat.  They blend to sting the nose and coat the palate the entire sip, but more importantly the finish.  Citrus, piney, pungent, resinous, yet clean like Double Trouble.  The abv did detract a little bit on the latter part of the palate as it was harsh.It definitely has a hoppy centered aftertaste that displays the citrus notes (pineapple, mango, grapefruit, orange), but balances into a spiciness with the malt.

It is worth all the hype, this much is true.  Grade: A-

Aged one year (2011):  Last Summer I bought two bottles for the purpose of enjoying one fresh and the other aged.  They were bottled on 5-28-10 and today (9-17-11) I thought was a great day to open up a beer from my stash.  Poured into a snifter I looked almost similar.  Some differences I noticed were a creamier head that developed late an had a yellowish tint to it.  The beer was super clear as the sediment has collected at the bottom of the bottle.  The color itself looked just a tad darker, but still possessed a vibrant ruby-orange hue.  Visually, this beer is very appealing.

The aroma was still chalk full of hops, sticky and resinous.  However, they did lack that fresh “kick” as noted the year before.  Not surprisingly, the malt character deepened and gave off some wonderful rich caramel notes along with a candied sweetness.  Minus the intense grapefruit aroma, I would liken this beer the second time around to their Red’s Rye or Pursuit of Hoppiness.  Both citrus and piney qualities could be found in the pungent hops.

The whole point of my little experiment was to see if it took on characteristics of a barleywine.  My theory was that it would.  The alcohol was more present in this sampling, but in the end the malts left me thinking I had just sipped a very boozy, hoppy Red Ale.  The finish is bitter with an abv warmth and honeyed malt aspect.  Regarding the mouthfeel, I’d say this was slightly below that of palate coating.  The sugary notes stuck to the roof of my mouth, but the hops (which stuck as well) and alcohol helped to clean the palate.  It is a slow sipper and best enjoyed around cellar temperatures.  No need to get this one cold as you will lessen the flavors.  Grade: B