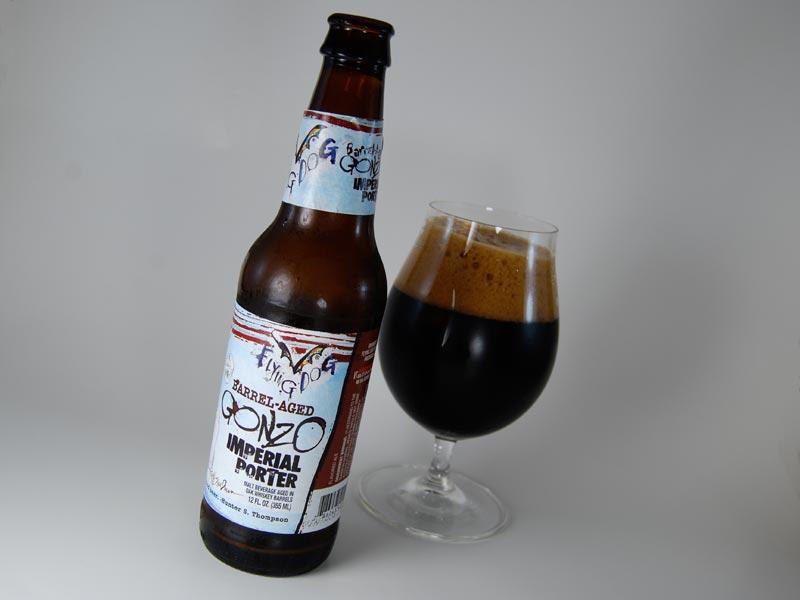 Until I typed the title of this beer, I positively knew I was drinking a stout. I picked this up purely on the recommendation of my local beer guy, who is constantly informing me of beers I want, even thought I didn’t even know they existed. This one from Flying Dog was one such brew. As always, I was an easy sell and left the store $6.39 poorer and with just a measly 12 ounces of what apparently was liquid gold to show for it.

By appearance, this thing is about as much a porter as I am. Its unbelievably dark, as deep and rich as some of the biggest most stout-like stouts I have seen. The head was a thick layer of creamy tan, that had its humble beginnings in three fingers of foam on the initial pour. It honestly looked liked this beer came from a nitro-tap, it looked thick, lusciously so.

The scent so overpoweringly streaming from my glass is the evidence of the ‘Barrel-Aged’ part of this Gonzo’s description. It is pure whisky, smooth, strong and adding to the overall allure. There is a caramel, dark chocolate blend mixed with the liquor, though, that tempers it even more so, sweetening it up. Closing my eyes and inhaling deeply, I could easily forget this is even a beer, so complex and un-beerlike it is. There are a few notes of dark fruit as well, mixing with the sweetness, but present nonetheless.

I’ve waited long enough, time for that first sip. Initially, it hits hard, the stinging on the back of my throat indicative of a beer with 13% ABV, not the 9.5% that this Gonzo brings. It is most definitely smooth, however, and as rich as my top two porters. There are huge burnt and roasty notes that were completely absent on the nose, but they add complexity and depth. Coffee too, makes a definite, albeit brief, appearance, but continues to add to the overall impression, just one more layer of a well-crafted brew. I find myself literally chewing, attempting to bite through and savor each flavor as they morph almost too quickly from one to the next.

Overall, yet another porter that disallows me the ignorant luxury of throwing the whole style out. A job well done by the folks out of Frederick.