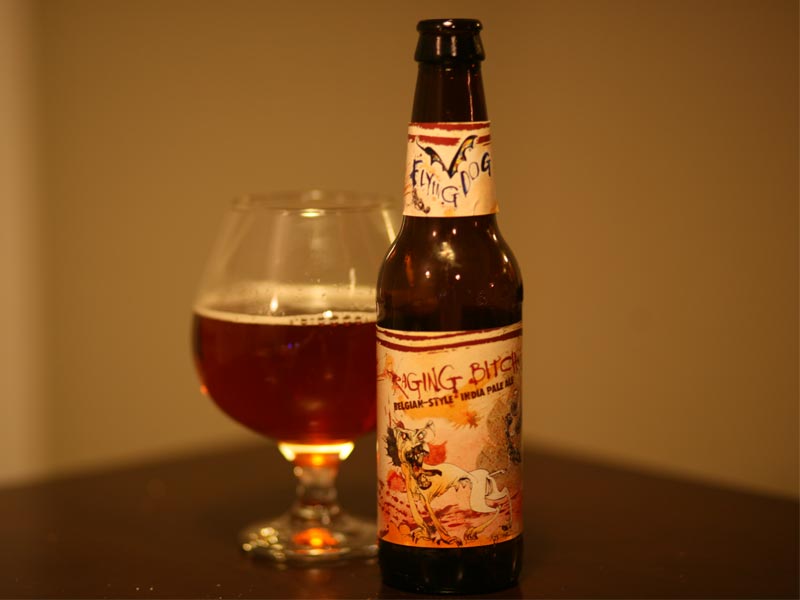 From the start, Flying Dog Brewery’s Raging Bitch Belgian-Style IPA has a lot of hype. It’s Flying Dog’s 20th Anniversary brew, so you at least know that one well-known American craft brewery chose to focus the significance of 20 years into this brew. The label on the bottle adds some more on that note: “Two inflammatory words … one wild drink. Nectar imprisoned in a bottle. Let it out. It is cruel to keep a wild animal locked up. Uncap it. Release it … stand back! Wallow in its golden glow in a glass beneath a white foaming head. Remember, enjoying a RAGING BITCH, unleashed, untamed, unbridled – and in heat – is pure GONZO! It has taken 20 years to get from there to here. Enjoy!” Okay, then.

I had to grab this IPA because it was selling out fast at my local liquor store. And I also happen to be on an IPA quest. The bottle’s label is pretty cool, kind of eclectic with its inkblots and expressionistic figures. It pours a nice deep copper into my snifter, with a head that ran for cover within seconds. I’m not sure what they meant by “a white foaming head,” but perhaps I just missed that because I’ve got a bottle and not a tap. Going in for the smell, I was hoping for some sweet citrus, and citrus I got. It definitely has a ruby red quality to it. Can’t miss this big aroma, it is quite pleasing.

Halfway through the Raging Bitch, I enjoyed a big bowl of my signature chili. I don’t know if that’s a good pairing or not, but that’s what I had. My chili is bold and full of good spices, packs a monster flavor. I am happy to report that chasing a heaping spoonful with a swig of Raging Bitch was a powerful thing to experience. The flavors in this IPA straight up dominated the chili flavors. It was at that point that I believed in this beer.

ABV here is 8.3%, so it’s sweet. Very well carbonated, has a nice big bite to it, but more than other IPAs I’ve had, the bite fades pretty quick and leaves all the flavors inside your mouth, on your tongue and throat. There’s no escaping the flavors here. The finish is nice and hoppy, and actually makes you want another. And another. Still, I think I’d feel messed up a bit if had 3 or more in a short period of time.

Overall I think Flying Dog has created a great dry-hopped IPA here. I haven’t had their Snake Dog IPA, which is their flagship IPA, but I imagine it’s also pretty good, if Raging Bitch is any indication. If you like IPAs, you should definitely taste Raging Bitch. Most def. I have 5 left if you want to try one…