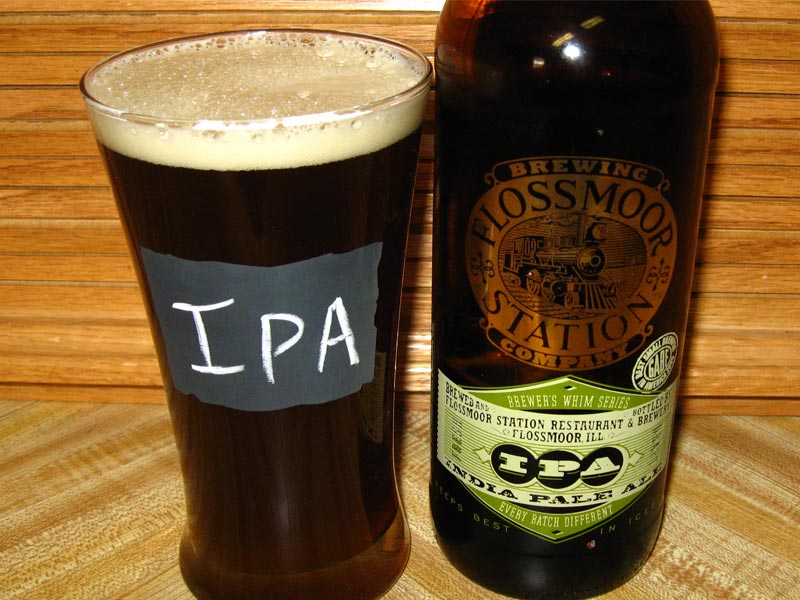 After buying a few new glasses yesterday I thought it would be nice to try them out and see if they make my beer drinking experience any better. I purchased a snifter that I had desperately been in need of for some time now, a goblet, and a tapered glass with that came with chalk. I thought this would be a sweet glass to take pictures with because I could write the name or style of the beer on the mini chalkboard (let me know what you think).

Upon getting an email of newly arrived beers from my local retailer, I stopped by to pick up a variety of items. One of them was Flossmoor Stations IPA. Within the last few years this local brewpub started bottling their beer into bombers for distribution in the Chicagoland area. Until this beers come out I was only aware of two; thier Station Master Wheat (see my review) and Pullman Brown Ale. Apparently, this beer is a part of their Brewer’s Whim Series so it might only be available for a short time.

It is an English-style IPA called Mick Jaggery according to Flossmoor’s blog. Appropriately named, it has a 7.5% ABV, lager malt presence, and utilizes an Indian palm sugar called Jaggery. They say that it “imparts a subtle complexity similar to light brown sugar.” I would definitely agree with this. The hops used are of the UK varieties which are more floral, earthy, and spicy.

The color is hazy bronze in nature with a low, but creamy head. I did get a good whiff of hops as I poured the beer. It has a good balance of caramel, biscuit malt notes and herbal hop highlights. The palm sugar does add to the mouthfeel and body of the beer making it stickier and heavier. At first, the malts and sugar lay down a sweet layer with each sip. The back half of the sip carries a hoppy kick to it. The aftertaste is predominately toasted malts, but a hop spiciness is noticeable and lingers.