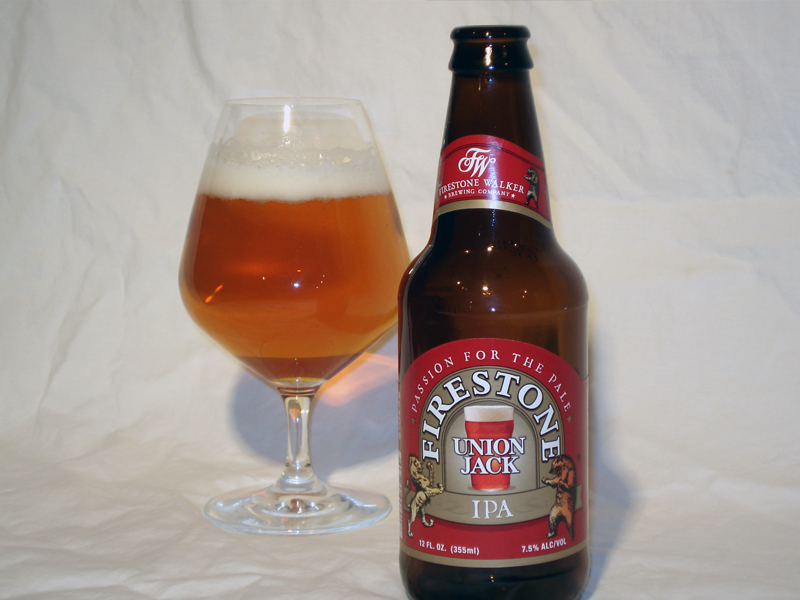 4 lbs of hops per BBL go into this beer.  It is dry hopped 3 separate times with Amarillo, Simcoe, Centennial, Chinook, and Cascade.  The bittering hops are Warrior and Simcoe which are both high alpha acid hops that lend a resinous punch to the finish which I will explain later.  The finishing hops, Cascade and Centennial, provide a floral/citrus component to the beer.  All that to say, this beer is hopped like an Imperial/Double IPA, yet retains an somewhat approachable abv making it moderately dangerous.  I found myself wanting to drink more than one in a sitting, but at $11 a 6 pack and given the abv, this brew is more enjoyable when drunk one at a time.  Trust me…you will instantly savor the flavors when you sip this hop-centric beer.

I sampled Double Jack before giving this one (the base) a try, but here in IL, Dubs was the first IPA of FW to hit the shelf.  Double Jack rocked my world causing me to keep my fridge well stocked with it for at least 3 months straight.  Wanting to sample their Pale Series beer, I was naturally excited when I found Union Jack on the shelf.

It pours a clear, light bronze hue with a dense ivory head.  Honestly, it looked lighter than some APAs I’ve had – my kind of IPA.  The orange hues were most dominant, but for the most part this looked close to the IPAs that 3 Floyds and Founders brew.

The aroma was all about the hops.  Floral, citrus, dank, resinous, pungent, herbal, grassy, honey, piney, woodsy, earthy and fruity notes were all present in this beer.  While there was more focus on the fruity aspects there is something here for every hop head to enjoy.  Not as grapefruit-like as expected, but the citrus aromas are more tangerine, orange, and peach.  There is a nice light caramel touch to the malt providing some sweetness that compliments the honey’d hop characteristics well.

The flavor is phenomenal!  FW does hoppy beers well and it shows.  Union Jack is a hop lovers dream.  Seriously, a few months after I finished my first 6 pack, I had a dream I was enjoying a pint of this on a tropical island.  Even though this beer is full on hops, it is well-balanced with a sweet caramel, biscuit-like malt backbone aid to sugar coat the front of the palate.  From there it becomes an all on assault on the taste buds (in a good way).  The hopping is crisp and clean…like a good IPA should be.  It seemed the bitterness amplified the abv a little as there were times this beer seemed like an Imperial IPA.  It as packed with resinous flavors…that if for sure!  The back half of the sip reveals the pungent dank high alpha hops used for bittering.  Wow!  It is intense.  The aftertaste is that of peach, mango, some apple, and light bready caramel.

Overall, I give this beer the highest grade for many reasons.  It is a quality beer that deserves more attention.  Compared to most IPAs on the market, I’d argue that this is as good as Bell’s Hopslam and Founders Double Trouble…if not in the same vein.  It is that good!