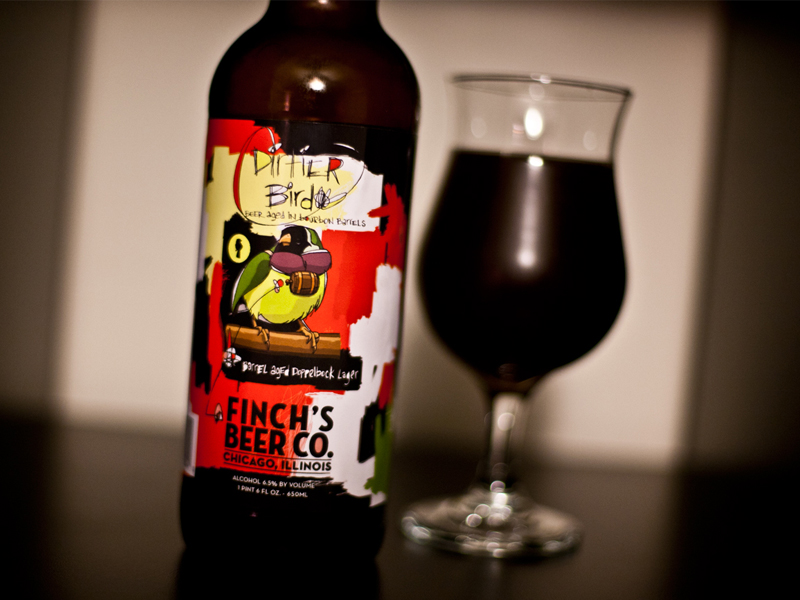 Tom: New to the Chicago craft beer scene since 2009 Finch beer produced this special barrel aged beer which released around the Christmas of 2011. I was lucky enough to find a bottle on my local liquor store shelf as this beer is limited. While I’m not a huge fan of Doppelbocks, this beer was aged in Bourbon barrels and given that it was a unique I pulled the trigger and made the purchase.

The pour was elegant and produced a clear deep amber/mahogany brew with a creamy beige head that lasted briefly then subsided. Towards the bottom of the bomber the beer got a little hazy which I attributed to the barrel aging.  Overall, the appearance was quality and did a good job of inviting me into the beer.

When it came to the aroma this beer was all Bourbon and malt.  As I poured the beer about a foot away from my nose I got a huge waft of vanilla, caramel, wood sugars, some char, high alcohol, and some smokey peat qualities. Toffee and sweet caramel made up the malt profile which was backed by the massive Bourbon barrel characteristics. The barrel aging did help to give some life to the malty brew, but in all honesty I think it turned a malty lager into something that smelled closer to a Scottish Wee-Heavy … interesting. After some evaluation, I started to pick out the lager yeast quality which was slightly masked by a burnt wood aroma. The fruity notes that were present came in the form of plum, fig, and raisin.

The flavor was creamy, smooth, malty and hearty. Seriously, this is a big brew. Surprisingly, it tasted far more robust in the abv than a moderate 6.5%. The Bourbon strength really came out in the finish as it seemed like I was sipping on a 2 hr old, aerated glass of Bourbon (not a bad thing). Up front, I got those classic Dopplebock malty notes that gave a rich dimension to the brew and guide you in the right direction. The smooth vanilla notes take over in the middle of the sip which blends right into the slightly harsh charred wood and alcohol notes. The caramel malts linger around with the vanilla in the aftertaste giving some body after a dry fruity finish.

I’m not sure how long they aged the beer in the barrels? Maybe 6 months? That seems standard. Dirtier Bird has character, depth, and according to the label some stank. I did find the tiny barrel on the dirty finch’s neck interesting as it reminded me of those St. Bernard dogs that rescue people. This beer is definitely a winter-type brew that will warm you up. If you have a bottle, make sure you share it with friends. Grade: B+

Taylor: I am a actually a big fan of Doppelbocks, and was very excited to open up this bottle of Finch’s on a cold and blustery winter evening. Everything I’ve seen from Finch’s to date has been in aluminum can form, so it was cool to see their art on a proper glass bottle. I’m going to defer to Tom’s review above for much of the evaluation, which I believe is spot on. This is a big beer. Finch’s delivers on the Bourbon and the super malty flavor profile, which is just packed with dark fruits, toffee/caramel and vanilla. And the finish is dry, and really boozy. Hard to believe this giant is only 6.5% ABV.

Unfortunately for Finch’s, my bottle was flat as a pancake. Really? Come ON! Poured straight into the glass, not a bubble of head emerged whatsoever. For a brand new “special release” bottle that set me back at least the cost of a good craft six pack, this was a major letdown. All of the flavors where there, but without the carbonation to brighten this beer and open it up on the palate, it felt like I was drinking pure wort … none of that crisp refreshing carbonation to balance out the huge impact of the malts and bourbon. I really wish I could give this one a higher grade, but instead I’m left wanting. I feel sorry for all the people out there that got a dud bottle like I did, I’m sure I’m not the only one. Grade: C+