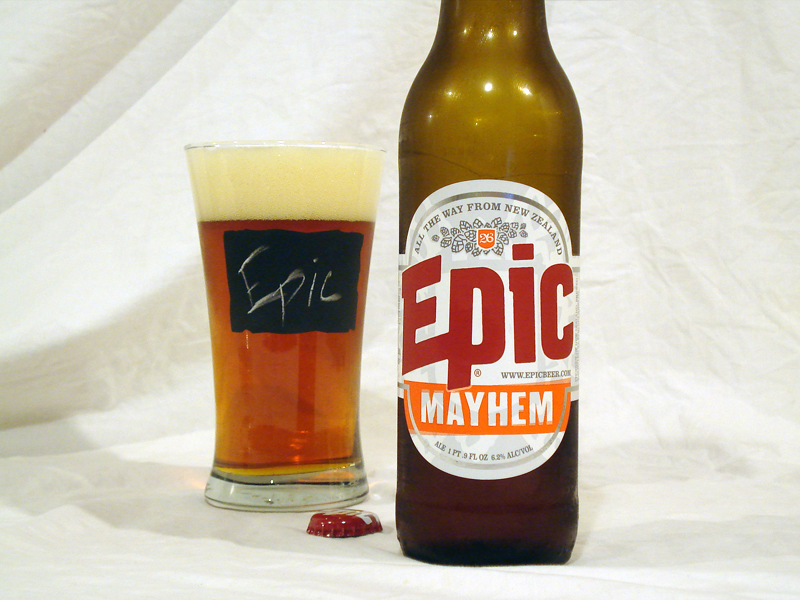 Epic Brewing Co. (not to be confused with the US brewery in Utah).  Their tagline is “Epic Beer, it just tastes bigger.”  I would wholeheartedly agree.  Mayhem might not be the biggest beer, but it certainly is bad ass.  At only 35 IBUs it packs a punch that your taste buds will enjoy.  Dressed in a pretty simple, yet classy bottle this beers color fits the makings of a good APA.  Slightly copper with yellow edges this clear beer pours silky producing a substantial beige head that laces and lasts.

The aroma contains a deep grapefruit nose that is tangled in spicy, floral, honey’d, piney hops.  I’ve never had a beer with Riwaka hops in it before and I must say I think it adds a fruitier dimension to the Cascade hop profile.  In fact, this smelled very similar to Sierra Nevada’s APA with just a little more aggression.  The is also a nice floral aspect to that plays a nice backdrop behind the fruity qualities.

I thoroughly enjoyed this beer start to finish.  While it is aggressive, it is very drinkable and pleasing…sessionable the way a APA should be.  Each sip is accompanied by a well-balanced act between malt and hops.  The hops provide a lively “pop” up front while the malts will move you into a bready honey’d aspect that brings out the floral hop characteristics.  A beer dominate in Cascade hops that I actually enjoy!  Imagine that.  Moving to the finish I was yet again met with a hoppy zing followed by a caramel and biscuit sweetness.  Mayhem lifts off you palate leaving just enough goodness behind to know you had a quality beer pushing your right back into the glass.  This one has my recommendation for sure.