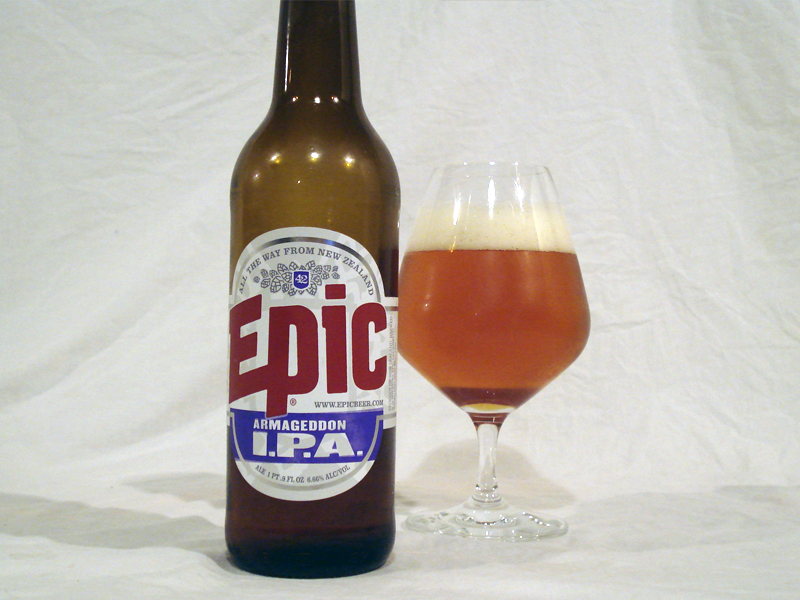 Armageddon.  This future apocalyptic battle will be nothing shy of epic as Good and Evil duke it out.  A couple thinks stuck out to me right away.  First, the abv is an eerie 6.66% which is the mark of the Beast.  Interesting, the book of Revelation explains that evil will be vanquished so one ought to ask themself, “who’s side am I on?”  Secondly, with a name like Armageddon, I best prepare my taste buds for an onslaught of flavor.

Epic Brewing out of New Zealand as not let me down so far.  After trying their strong APA, I thought I’d up the stakes.  Pouring this clear beer reminded me of Odell’s Myrcenary to some degree with its similar gold hue.  A head that laced capped this brew in a dense fluffy way again reminding me of some great double IPAs I’ve had in the past.  While Armageddon is not a I2PA and the abv only clocks in at 6.66% the hop profile on this sucker is huge.

The aroma and taste were both exploding with flavorful hop qualities.  The varieties used are high in alpha acids making for a very bitter beer satisfied the hophead in me, but also allowed me to drink comfortable.  The smooth malt characters are close to their APA Mayhem.  Light caramel notes with touch of toasty grains lay the foundation for a stellar beer.  The finish clean, resinous, and bitter (as expected).  The war I thought my taste buds would have to fight was not as grand as I thought.  Rather, the hops invaded quickly.  Another fine brew from Epic that demands attention.