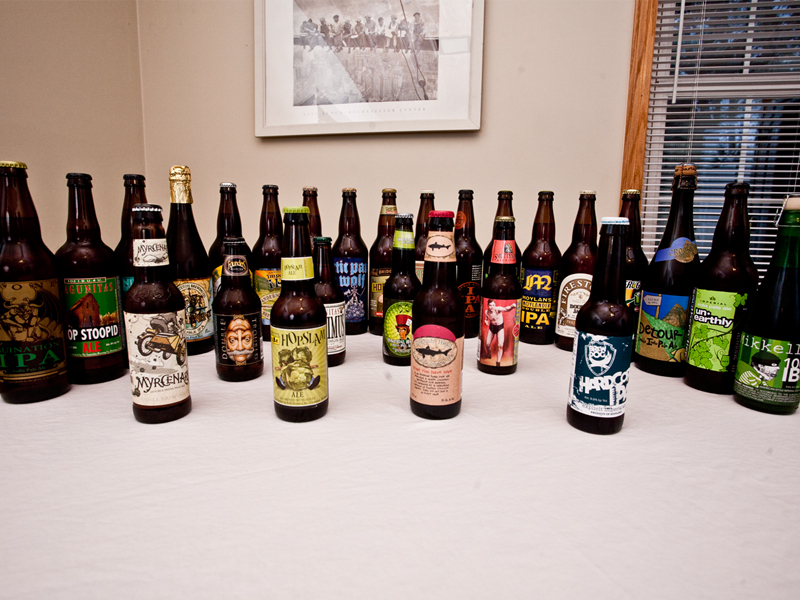 Some of the PHM staff got together yesterday evening for a Double/Imperial IPA tasting. We’ve never done a tasting before, and figured it was time to get it done … it was one of the things on our Elusive To Dos list, mostly because all of us have day jobs, kids, and lots of other responsibilities outside of arranging beer events. But that’s no reason to abstain!

Since The Perfectly Happy Man started in December 2009, it’s safe to say that all of us have really expanded our palates. We’ve come to know and love craft beer for its history, its people, its innovation, and its color. It’s hard to avoid hops in America. Mike pointed out last night that one of the reasons for that is that American malts aren’t nearly as solid in the states as they are abroad … and therefore craft brewers use imported malts much more often. This is one of the reasons American hops are the stuff of legend. So … stylistically, most of us have come to know and love the hoppy beers (not to the exclusion of maltier styles though … of course not) that are so popular here in the states.

The Imperial (“Double” in the states) India Pale Ale is one of those styles that often epitomizes everything that’s great about American craft brewing. It’s big … why have a regular IPA when you could have more? It also stars some of the best hops in the world:

So, we decided to throw down some brats, cheeses, pretzels … and wash them all down with all the Double IPAs we could get our hands on. Our final beer list included:

We didn’t end up tasting all of the above because only 5 of us made it to the tasting. But we did sample 10 of them:

We finished the night with a round of Mikkeller 1000 IBU, which was easily the hoppiest, driest, most palate-punching beer of the night. We also ate the following cheeses:

Thoughts from the PHM Team

Tom: In a sea of Double/Imperial IPAs the bitterness can take it’s toll on your palate. One thing I was not anticipating as an outcome of this challage was getting a better grasp of the malt profile within amped up IPAs. Take for example Dogfish Head’s 90 Minute IPA. If this was the first beer I drank or reached for on any given evening the bitterness would be noticable. However, after the intense bittering blast from Uintas Detour the 90 Minute took on a more reserved, low-key hops profile. The malt is what really came across – biscuity and toasty – something I had not really noticed before. The same was true for a number of these beers even in the 1st flight. The sweetness of the malt really came across. While you might say, “no duh Tom, you’re drinking hoppy beers” I might argue that every opportunity you get to pick up on new flavors and ingredients, have “ah ha” moments, and experience various aspects of different styles helps to refine your palate. I found it hard to rate these IPAs against each other back to back to back (and not becuase of palate fatigue). They are all great beers. Flight 3 was my favorite group to arrange as all three beers were pretty evenly matched and they happen to be three of my favorite IPAs. I had fun trying to pick up the nuances each brewery has when sampling these beers (hopping styles, hops used, malt profile, finish, etc). I’d do this again for sure!

Taylor: I was just really happy to be able to sit down with my PHM compadres and enjoy some good beer and food. We’d compiled a ridiculous list of IPAs over the last couple of weeks and I was most excited to try Odell’s Myrcenary and the Mikkeller 1000 IBU. I was really happy when I voted blind in the first flight and it turned out to be the Odell. I can’t say enough good stuff about Odell. I was super happy with the Humboldt Fog goat cheese as well, as a pairing. It was so incredibly smooth, paired perfectly with these hop giants. Lessons learned from this first tasting experience: try and get more people. Don’t get too many beers (is that even possible?). Eat plenty of food and drink plenty of water … pace yourself.