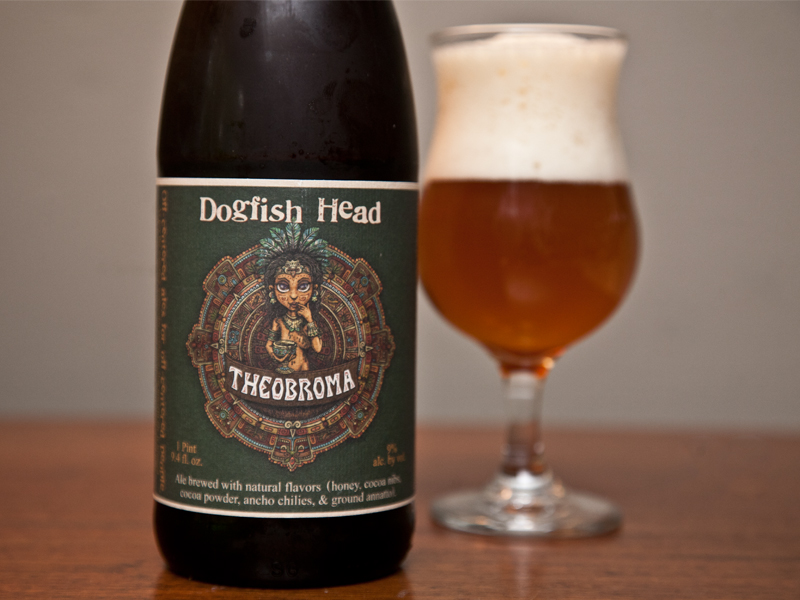 If you know anything about Dogfish Head, you know that founder Sam Calagione isn’t just the most followed and photogenic of American craft brewers. Since founding his hugely popular brewing company in 1995, Sam has also established himself and his brand as innovative. And that may be putting it gently. If you’re a craft beer junkie, you’ve probably seen Sam around at collaborative events, conferences, tastings, interviews, and competitions all over the country. People love Dogfish Head because it stands for something unique and refined … yet totally chaotic. More than any other American brewery, Dogfish Head takes the ancient art of brewing and makes it both exciting and accessible to ordinary people. Aside from how good their beer tastes, it’s my favorite thing about them.

One of the seasonal ales brewed at Dogfish Head is Theobroma. It comes in a standard 750mL bomber and has an awesome green label with an illustration of an Aztec goddess designed by Marq Spusta. Marq also designed artwork for Dogfish Head’s Brew Goddess Series Punkin Ale, Chicory Stout, Festina Pêche, Aprihop; and the beer label for Robert Johnson’s Hellhound On My Ale. He does awesome screen prints.

Theobroma is steeped in history, archaeology, anthropology, and such. It’s part of the Ancient Ales series, which contains beers made in collaboration with molecular archaeologist Dr. Patrick McGovern, a leading expert on ancient beverages. The whole idea of Theobroma (“food of the gods”) comes from the chemical analysis of pottery fragments found in Honduras revealing the earliest known alcoholic chocolate drink used by early civilizations. According to the Dogfish Head website, the discovery of this beverage pushed back the earliest use of cocoa for human consumption more than 500 years to 1200 BC. As per the analysis, Theobroma is brewed with Aztec cocoa powder and cocoa nibs, honey, chilies, and annatto.

As I poured my glass of Theobroma into a tulip, I laughed to myself. Only Dogfish Head would brew a cocoa beer that looks like an Imperial IPA. The color is a light reddish brown: not what you’d expect given the exotic ingredients. It developed a nice big light tan head of large, loose bubbles that diminished very rapidly after the pour, down to a thin film in under a minute. The nose has very earthy aromas and subtly reminded me of black/green tea. While cocoa powder and nibs are used, there was no chocolate profile in the smell that I could detect.

Theobroma is so interesting! I can’t imagine anything it could be compared to, and though it is in some ways confusing to the palate (the first time you have it, at least), Dogfish Head’s skill in brewing still comes through: it tastes expertly and carefully made. Up front are a lot of those earthy, grassy, dark tea-like notes, which I love because they remind me so vividly of the lush Mexican forests where this beer’s ancestors were made. Maybe that’s a little melodramatic, but that doesn’t make it any less true. As the sip finishes, you get some subtle heat from the chilies: not spicy per se, but warm and tingly on the back of your throat. Such character! Another important thing to note about Theobroma is that it is unfiltered and packs a punch at 9.0% ABV. And those ABVs are really well hidden by all the nuance of the other ingredients in the recipe. So be careful! It’d be fairly easy to put down the whole bottle in 30 minutes or so, but you’d be feeling it! For those cocoa fiends out there: let this one come up in temperature a bit. You’ll taste more of the cocoa than when it first comes out of the fridge.

I can’t really find a whole lot to say about this beer in the negative: it’s very well brewed. It’s super innovative and interesting. It tells a story. It’s got a unique sensory aura. It combines some really interesting flavors and makes them palatable. It has really great label art. It seems distinguished and refined, but also crazy and belligerent. Best of all, it “thumbs its nose at the Reinheitsgebot,” in classic Dogfish style. When I want to drink something crazy and creative, I will always look to Dogfish Head first.