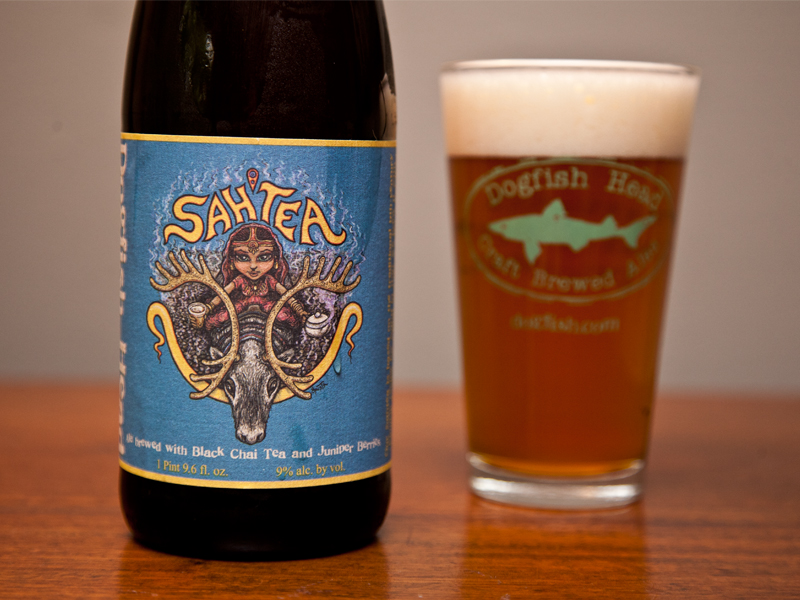 Dogfish Head’s Sah’tea, a seasonal spiced ale brewed after the Finnish “sahti”, which features loads of grain and malt, and juniper berries (sometimes instead of hops). Sah’tea is another in the Ancient Ales family: beers brewed in collaboration with Dr. Patrick McGovern, molecular archaeologist and sage of ancient beverages. The recipe behind sahti dates back to the 9th century.

The process under which Sah’tea is made is nearly as interesting as the final product: back in the 9th century, brewers didn’t have stainless steel vessels to brew wort in: they had wood vats. Which you can’t put over a fire. So, these ancient innovators stoked up a huge fire and placed river rocks in it. Once those rocks were glowing hot, they dropped them deftly into the mix, caramelizing the wort and readying it for fermentation. This same ancient practice is used by Dogfish Head for the brewing of Sah’tea. If ya can’t beat ’em, join ’em, right?

When you get right down to it, Sah’tea is a great example of a spiced ale. It has a lot of spices in it: black tea, cardamom, cinnamon, ginger, cloves, and black pepper. It’s going to be an interesting treat. I poured it into my Dogfish tumbler, a light brownish gold color, and a quick foam for the head, just like almost every Dogfish Head beer I’ve ever  poured: very keenly carbonated. The head diminished pretty quickly, about 30-45 seconds and it was down to a frothy film.

The nose on this beast was not what I expected: it was more subtly spicy, and had that yeasty, musty earthiness that comes from the German Weizen yeast they use (the Finns typically use baking yeast in their sahti). So, the aromas are more yeast-forward, with the spice profile lingering in the background.

The sip. Again, these Ancient Ales are incomparable. They are entirely nuance: recipes from the ancient past that reflect long-standing taste preferences. My brain immediately thinks “yeasty” … and then the spices hit. Like the aroma, you’ll taste some of that German yeast up front and then loads of spice flavors. It’s sweet and musty, and very tealike. Oh, and boozy, too. The 9.0% ABV is not bashful this time around, and while Dogfish claim this beer is highly quaffable … look out, because it will make you take a seat if you drink it down quick. Believe me, I know from experience.

I suppose they call it quaffable because none of the many flavors are super strong: it’s a balanced beer whose ingredients are agreeably equalized. You don’t feel overpowered by any one element, which means you can pour it down without twisting your face.

This beer will not be for everyone. I myself am very fair-weather when it comes to spiced ales. If you enjoy anything with wheat in it, or chai tea, or cinnamon, or ancient lore … you should definitely give it a go.