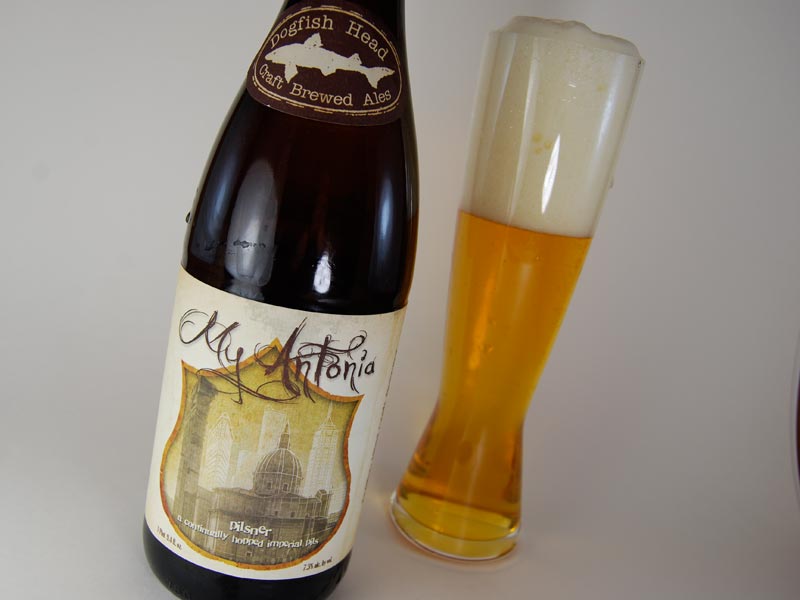 Tom: I brought a selection of beers over to my parent’s house to watch the Bears vs Packers regular season game some months back. Well, with the smell of  my Mom baking chocolate chip oatmeal cookies I was lured away from the TV and decided to review some beer (5 minutes after the game started).

A continually-hopped Pilsner was the first to be sampled. My malty beer loving dad said it was “[hops] too strong” and my indifferent mom said it was “interesting.” As for me, I really enjoyed it. My Antonia is an unconventional approach to a beer that is the #1 selling style in the market (mind they are cheap and watered down).

Pouring into my pils glass the golden hazy, bubbly brew looked nice as the sun shone through the tall glass. The fluffy white head floated carelessly atop the brew and left some Brussels lace down the flute.

Huge notes of pils malt were fresh and added a sweet aroma that filled my nose. This was then accompanied by pleasant hints of hay, fresh cut grass, freshly cracked grain and the smell of harvest time near my college in Upland, IN. There was definitely some old world tradition found in the classic and true to style use of Noble hops. Giving off an herbal-grassy aroma that complimented the malts. The hops smelled like Saaz or Hallertau, but whatever variety was used they were soft yet assertive. The west coast hops added a thicker piney/resinous dimension that really took me off guard at first, but at the same time contributed something new and interesting.

The hops really take a front seat in the taste. It seems imperial (i.e., Sam Adams Imperial Pils or Port’s Imperial Panzer Pils), but the 7.5% abv did not come across strong and remained fairly mild. So the only thing imperial about this brew was the hopping and I liked it. Grassy, straw and hay flavors were present towards the middle of the palate while the bitterness from the hops was up front and at the finish. As the beer warmed a little the flavors blended more and there was definitely a hoppy kick to it.

Refreshing in a new way, this beer is different. I would recommend giving it a try and comparing it to various pilsners for flavor recognition.

Oh, and those cookies…glorious! They went surprisingly well with the beer. The sweet chocolate canceled out the malts at times allowing the hops to shine though. On the other hand, the oatmeal paired nicely with the sweet pils malts. Grade: A-

Michael: It’s 70 degrees. I know it’s going to storm in a few minutes and I know this kind of glorious taste of summer will be but a fluke, before it plummets again tomorrow and we are back to mid fifties and rain, but right now it’s 70 and I’m sitting on my front lawn. With a beer in hand. Ah the simple joys.

It’s My Antonia from Dogfish Head, an imperial pils, whatever that means. Apparently a “lagerific departure for our ale centric brewery,” I am interested in Dogfish’s likely creative take on a traditional and oft misunderstood style. It’s almost summer, so the discovery of a good, clean, interesting pilsner is rare boon.

This thing puffed like a seventies Afro. It was solid, too, not dwindling much until I stepped out into the humid Chicago air. It settled after a few minutes and I was able to add a bit of liquid which had been barely half the glass at first. It had a steady gathering of bubbles streaming constantly through the beautifully gold core and up to the ecru head. The smell was an incredibly pleasant blend of lemony pilsner and light hops. It was squeaky clean, a pleasure just to sip. It was heavy for a light-in-color beer, it would be a disappointing shock for the Bud Light fan, I’m sure. The hops is more present on the finish than anywhere, I slightly bitter linger that reminds you that it’s a craft brewer’s take on a classic style. The core of the flavor is a straight lemon fresh, malt hinted refreshment. It’s a great beer, but one with enough ‘umph’ to not be the best partner for a barbecue or a 90 degree day. Grade: B+