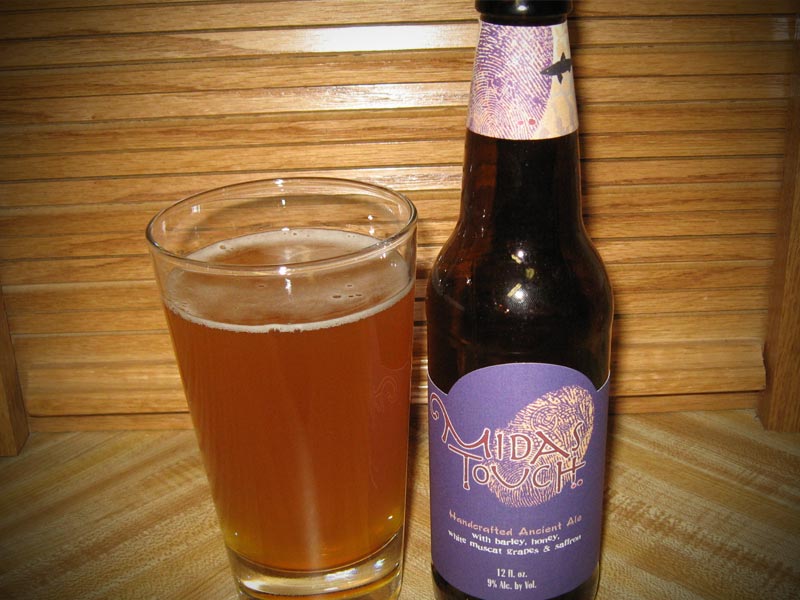 Do you want to know what really elevates a beer into the A grade for me? Respect. Respect for the beer, the brewmaster, and the history behind the beer. At Dogfish Head they are all about the beer business and taking it to a whole new level. One way they are doing this is through scientific and archeological findings. A while back I bought Sam Calagione’s (owner and head brewer of Dogfish) book titled Extreme Brewing: An Enthusiast’s Guide to Brewing Craft Beer at Home and set out on a quest to make a clone of his Midas Touch because of its historic value.

Harkening back to the myth of King Midas – everything he touched turned to gold – this beer captures that with its amazing golden hue. Brewed from an ancient recipe found in the Middle East, this beer literally reaches back in history and brings you to the origin of fermented beverages. If you like beer, mead, or wine Midas Touch will allow you to experience all three due to it’s interesting ingredients and dynamics. Personally, the history brings this beer (and many a Dogfish brew) to life in a way that most beers cannot even come close to. It was that enjoyment that drove me to brew my own concoction.

Not wanting to simply copy Sam’s recipe straight up, I added some Pale malt to the grain bill and dubbed it Macedonian Myth. Surprisingly, I found that saffron is the world’s most expensive spice by weight after paying $18 for less than a gram of the stuff. I’ve included a picture of my homebrew for you to see in this review, but please check out the whole process on my blog.

Taste: It literally melts in your mouth. It has a mead-like quality of sweet honey at the start, a wine-like grape and alcohol middle, and a subtle earthy/herbal spicy end. Take your time with this beer and explore all its flavors.

Mouthfeel: On the heavy side because of the grape concentrate added during fermentation. Moderate carbonation aids in cleaning palate. The alcohol strength gives it a nice kick. The aftertaste explodes with sweet flavors. I would say it is full-bodied due to the residual sugars present (the malt components are only there as a building block for the beer).

This is a must try! Sam Calagione…if you ever read this…cheers!!!