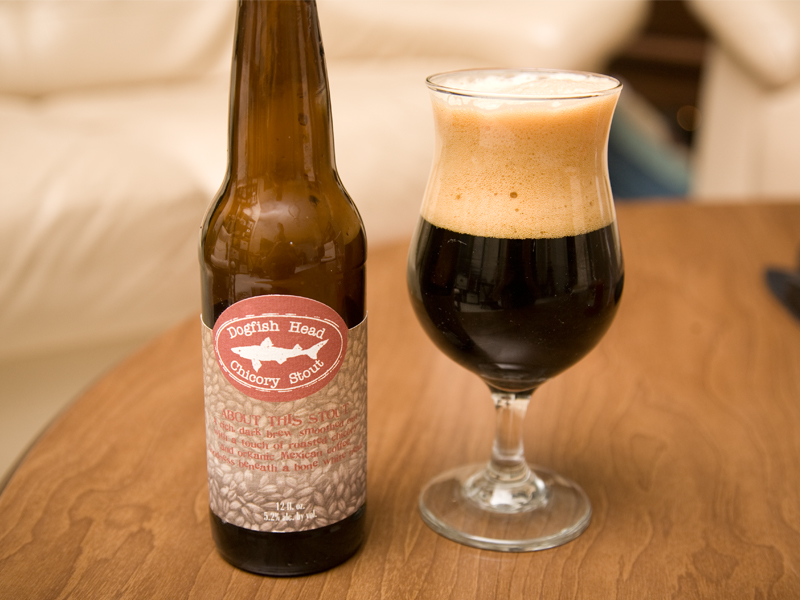 Taylor:  Chicory Stout is one of Dogfish Head’s earliest recipes, first brewed by Sam Calagione in 1995 when the operation was a simple 10-gallon system. It’s one of the first of Dogfish Head’s ventures into the realm of eccentric recipes, a theme that has now become the norm for the Delaware-based brewer. Most people in the beer world will agree that though not every one of Dogfish Head’s creations is loved by all, each one is made with great vision, precision, and care.

It should come as no surprise, then, that the Chicory Stout, a winter seasonal, stands among the best of Dogfish Head’s brews. The recipe features ingredients such as Mexican coffee and roasted chicory root, which is used in certain parts of the world (locally it’s famous in New Orleans) as a coffee substitute. You’ll also find some licorice root is used, as well as St. John’s Wort. Citing the former, Calagione quips that the Chicory Stout is “the only anti-depressant depressant”.

On to the beer. It pours a deep, dark espresso brown into my tulip glass (I’ve been using this glass more recently and really like it a lot) and forms a great big head of light tan. The nose leaps from the glass, aided by the inward taper of the tulip. It smells just like it should … roasted coffee and chocolate! There’s no boozyness at all. With ABV at a mere 5.2%, I am preparing myself for a drinkable stout. Plenty of flavor, and not too heavy!

I turn out to be right, of course. Dogfish Head has a way of developing and brewing some really fantastic recipes, and being super consistent in all aspects of execution. From appearance to aroma, taste, mouthfeel, and finish … Chicory Stout proves an excellent companion for the Stout lover. It’s highly sessionable and full of great, fresh flavors. The spicy Mexican coffee, and sharp combination of chicory and licorice root give it character. The sweet and roasty are very slightly tempered with whole-leaf Cascade and Fuggles hops … but don’t worry: at only 25 IBUs, this is not a bitter beer.

If you love stout but are sometimes frustrated that you can’t always session well with the style, think again. Dogfish Head’s Chicory Stout will satisfy your needy palate, but won’t fill you up and spin your clock like bigger, higher ABV stouts will. Remember, this beer is a winter seasonal. I plan on picking up some more before winter’s through. I also plan on tasting Chicory Stout side-by-side with Dieu du Ciel’s Aphrodite (Aphrodisiaque in Canada) Stout.  Grade: A

Tom:  Personally, I think this beer should be in their ‘year round’ line up.  At 5% abv this is a great session ale and reminds me a lot of a great pub classic-Guinness (with more flavor a course).  Having it as a Winter seasonal does not do it justice in my opinion.  Yes it is a stout, but there is more flavor packed into this beer than strength.  I’ve had a bunch of coffee beers and this one is at the top of the heap.  Maybe it is the chicory and St. John’s Wort that is used which give it that extra earthy, grassy, root-like component?

It has an almost licorice aroma and flavor, but the woody aspect of the chicory brings it around and allows the focus to be on the roasted grains.  The bitterness comes from the chicory root (although it mellows the bitterness in coffee) which reminds me of the coffee I enjoyed while eating Beignets in the Cafe Du Monde in New Orleans French Market.  While the city itself smelled like garbage and sewage, the coffee was an out of body experience.  Similarly, this beer is rather different.  What seems to be a Dry Stout with regards to mouthfeel and finish, turns out to be a really complex and flavorful brew that is very drinkable (much like 3 Floyds Black Sun).  Actually, the more I drank this beer it began to smooth out.  Awesome hint of chocolate and minor spice warmed my palate.  Chicory Stout is a grand beer.  I only wish I had some pastries to enjoy it with.  Grade: A-