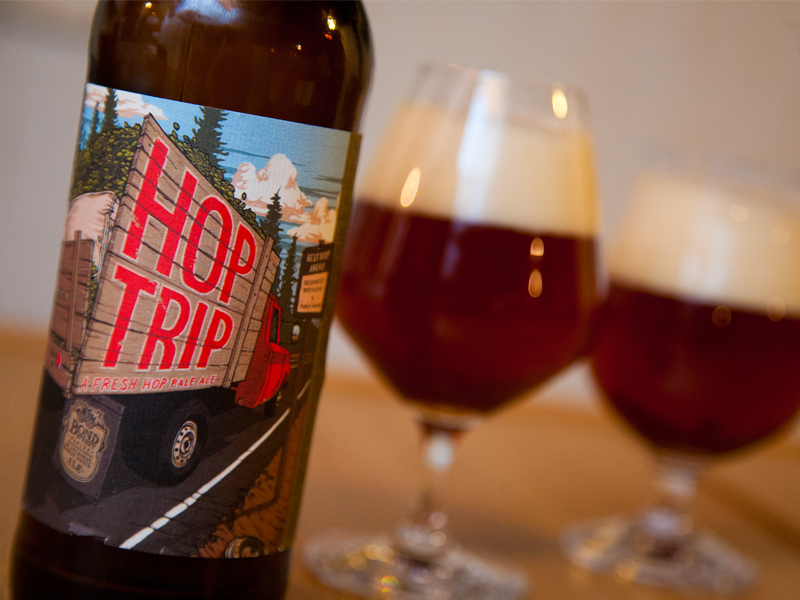 Tom and I recently cracked a bottle of Deschutes Brewery’s Bond Street Series Hop Trip, a fresh-hopped American Pale Ale. It comes as per usual in the familiar 650mL bomber, and has a nice label with an illustration of a truck carrying an overflowing load of hops down a forested Oregon road. I guess those hops are going on a trip somewhere. The Bond Street Series features three seasonals: Hop Henge IPA (available January through April), Hop in the Dark Cascadian Dark Ale (available May through September), and finally Hop Trip Fresh Hop Pale Ale (available October through December). Bond Street is where the Deschutes Public House is in Bend, Oregon … hence the name of the series. These “hop-forward” beers all started at the Public House.

Poured into both a tulip and snifter, you can immediately smell the floral hops. I thought they were a bit musty, and the interesting thing is that although this is touted as a seriously hopped beer, it is actually pretty malty, too. Dark amber in color, with a light tan head and some serious lacing. It both smells and tastes quite resinous … combined with some sweet toasted malt flavors, this gives the beer a chewy mouthfeel that really coats the inside of your mouth and lingers after the finish. Served first out of the fridge, the carbonation is nice and the beer feels very balanced, not really tipped in the hops’ favor. As the beer warms and loses some fizz, I thought that the malt sweetness dominated the start of the sip, and the hops lingered in and after the finish with a bitter tang at the back of the throat. At 5.5% ABV, this is an easy drinker of a Pale Ale, and you get some great hop aromas and flavors, balanced by the malts. I am very curious to know the specific hops and malts used in this beer, and in what quantities. In all Hop Trip didn’t trip me up, but it didn’t wow me, either. I thought it was going to be much more hop-dominant than it turned out to be. Tom and I agreed it almost tasted more like a hopped Red Ale.