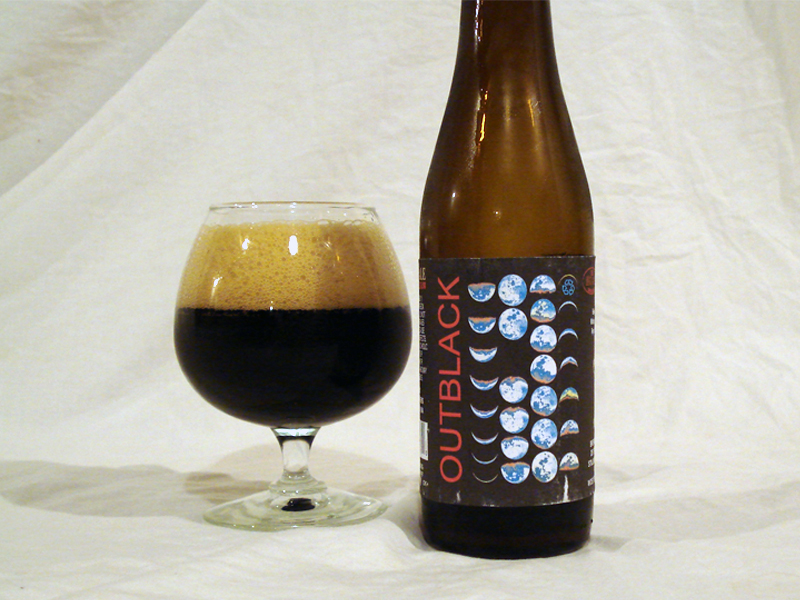 I must say, information on this beer is limited … just like the beer.  With that said allow me to summarize what I have found in my research for this beer.  For starters it is a collaboration between De Struise in Belgium and Stillwater Artisanal Ale out of the US.  Apparently the beer is a “marriage” of a Belgian Strong Ale and a Black IPA.  However, after tasting this beer I would say it is closer to a stout leaving me a little confused as how to classify.  It was brewed only once so if you find a bottle seize it with haste.  Why?

Because it is of the utmost quality…that is why.  For some reason this beer did right by me.  Allow me to try and give a worthy explanation.

The 11.2 oz bottle clocks in at 10% abv making you think your in for a doozy of a stout or strong ale.  However, while pouring the black liquid (that is rudy red while held in the light) it was apparent that this beer would be soft and well spoken.  While the label’s focus on the waxing and waning of the moon’s or earth’s cycle the aroma and taste eclipsed my palate with brilliance.

Smallie (the name I’ve given my short snifter) brought the aromas to a point as I dove in.  The first thing that caught my senses was the hint of mint.  Herbal and fresh.  Mint?  Not in a antiseptic way, but rather a mellow tea quality.  What followed was a minor alcoholic heat then a licorice, roasted barley character.  Given the smell I felt comfortable ruling out a Black IPA as the style.  There did not seem to be the characteristic assault from both hops and burnt malt that the most beers do.  Things were mellow (granted I might have an old bottle) and more stout-like.

The taste was a real treat.  I’m not sure what hops were used, but whatever they were they paired amazingly well with the malt.  Minty flavors washed over my palate and gave some spice to the beer while the creamy smooth flavors of a stout sank in.  Like the aroma the flavor was mellow…chill.  I appreciated this aspect as it allowed me to savor this beer.  Nothing huge or grandiose, just an easy sipper.  The yeast strain gave a bready appeal reminding me of Quads and Belgian strong ales.  A great night cap this beer is moderately heavy and creamy (due to oats), but the minty quality lifts the roasted grains off the palate just enough to provide a clean finish.  The aftertaste is silky and porter-like with faint hints of coffee and chocolate.