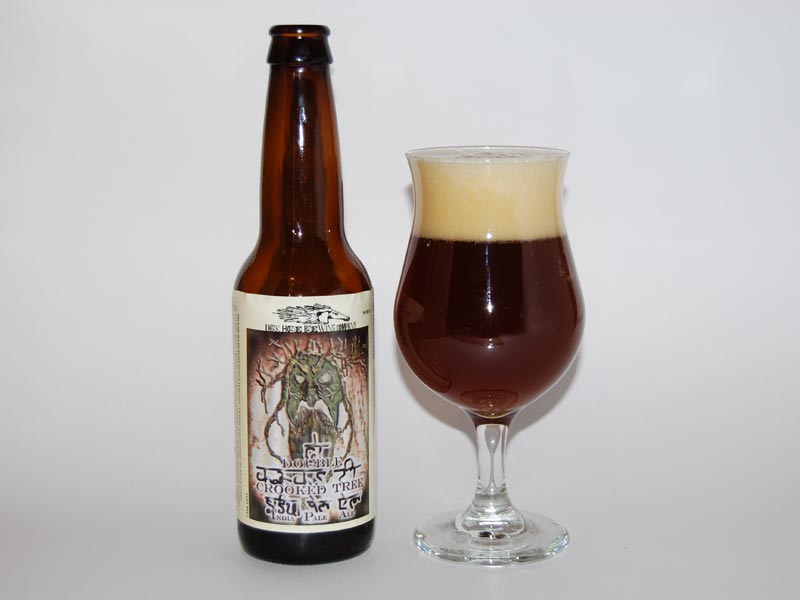 Michael: With a seemingly possessed tree staring at me from the label, I anticipated something devious from this beer. But rather than confronting Treebeard’s archenemy, it felt like my tastebuds had wandered into a grapefruit grove. The bursts of citrus were both intense and enjoyable. It poured gorgeously; an opaque cherry-brown with an oatmeal head that lasted through. My preconceptions of a devilish character were unfounded. There were layers of fruit past the grapefruit, mixed with pine and a big, bittery kick for a finish. It was like squeezing a Gusher fruit snack between my teeth, and getting an ooze of citrus and a follow up mouthfull of bark and dirt. The alcohol rounded everything up, washing away the first few flavors and settling on the back of my mouth for several minutes. It wasn’t potent, just present.

As I continue to explore the world of beer, I am often surprised. With this Double IPA, it happened again. If not for the fruit, the silky texture of the brew would have had me guessing I was sampling a stout. It went down so easy and yet was exciting and eventful, flavors individually distinguishable, and yet blending wonderfully to create a balanced and intriguing concoction. And as with so many stouts, the ABV was hid incredibly well. It turned out to be a nightcap, at 13.5% my already dreary eyelids began to droop a bit more.

John: This brew sat on a shelf for 12 months after I tasted its sisters from the six pack. Every time I walked by the “stash” I my mouth salivated and I looked forward to this day. With the memory of a high quality double IPA taste a year later I wasn’t disappointed. Dark Horse Double poured a hazy, amber color and smelled a fruity, caramely hops. The head was slight and dissipated quickly. The first impression of taste was smooth, rich, caramel! Hops where hidden among the caramels note but note lost. This time it seems that everything got better. Like good wine this beer gets better with age. The mouth taste was medium with a clinging capacity. It coated the inside of my mouth extending the good beer experience. Get this beer. Get a six pack and put 2 way for a rainy day if you can resist the temptation of drinking it before it’s “ready”.