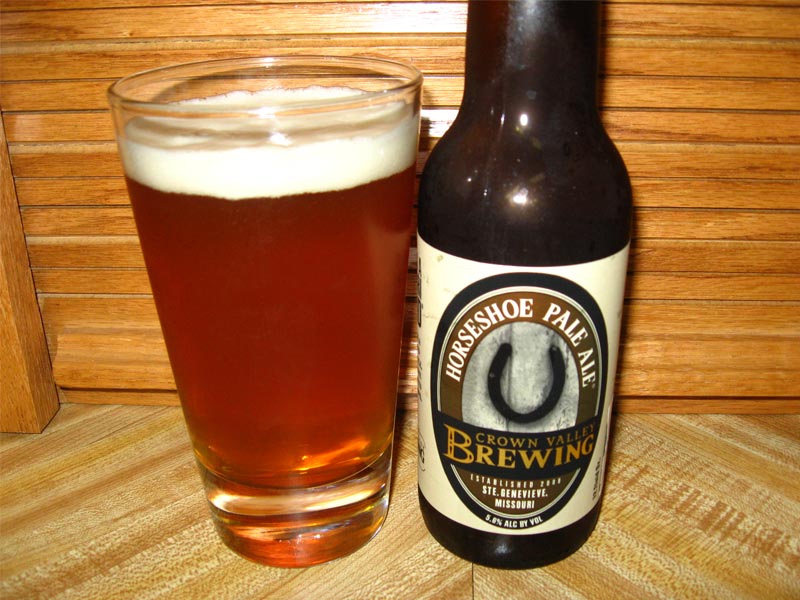 My second beer from Crown Valley Brewing needed to be one that is somewhat hop centric in order to see how they do brewing hoppier beers. I chose their APA as they do not brew an IPA that I could find. Now to start off, let me acknowledge that they brew a good number of Amber and Vienna-style lagers which you’ll want to keep in the back of your mind.

Pouring this APA was mundane, but I notice the stream was a nice gold honey color that turned into a copper hue when together in the glass. Before the picture the head was substantial, dense and left lacing.

The aroma was very malty with a floral hop presence. They used Cascade to brew with and there is a noticeable resinous, piney, fruity, citrus component as well, but overall I’d say this Pale is quite mellow. Maybe “well-balanced” might be appropriate here since not one side overpowers the others (this falls into an English-style Pale in my opinion). I did pick up a biscuit malt quality which somewhat surprised me. It might have added a unique twist, but frankly I thought I smelled Munich or Vienna malts. Meaning that this beer smelled more like a hoppy Marzen or Vienna lager.

Moving onto the taste the first thing that registered on my palate was the malty aspect. A light caramel, semi-toasty, biscuit flavor washed over my tongue and stayed there for some time. It was not until right before the finish that the hops had any seeming effect on the flavor. They helped to round out the malts, but their bitterness was mild leaving behind more floral honey notes. Crown Valley was right in saying that it is “medium-bodied ale” but I disagree with calling it a Pale. I’d be more apt to call it an ESB. At the risk of sounding arrogant (not bastard) I might recommend lightening up the malt and adding a few more hops.