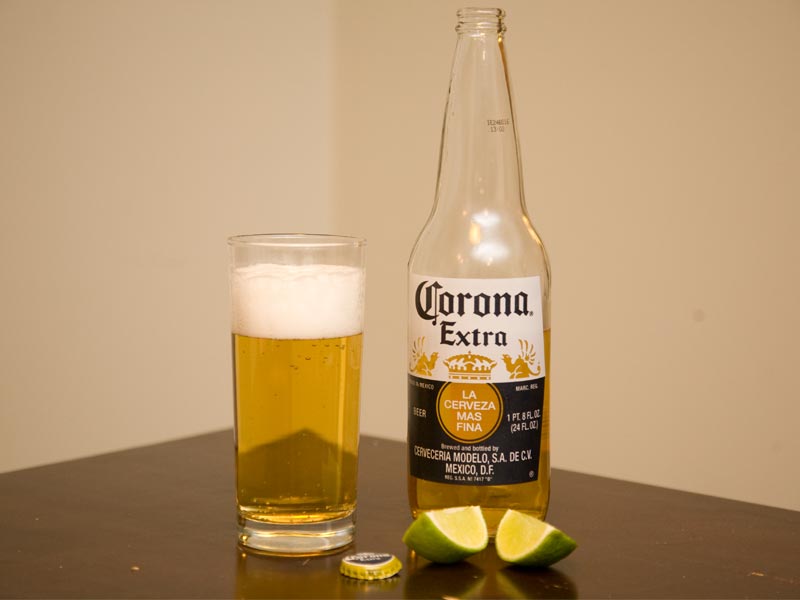 Tonight’s sudsy companion is accompanying me on a walk through Beef Brisket Forest, along the Green Bean Stream and over Potato Pass. But before I sat down to enjoy the feast, I spent a little time getting to know my fairweather friend. It’s an adjunct lager: light straw colored, extremely clear, with a bubbly white head that’s gone in no time, just like all the other adjunct lagers. It is unassuming and deviously inviting to rookies. Maybe that’s why people who hate beer drink it socially. Or throw fruit in it. It barely smells like some kind of grain, perhaps corn, but really not much else. It has a strange flavor that makes it unique, and makes it more flavorful than BudMillerCoors et al … a little pilsener-y. If I have to drink an adjunct, that’s why I usually would choose Corona. But to be frank, I never go anywhere where I have to drink an adjunct.

I don’t really know what skunk smells or tastes like when it comes to beer, and I’ve read some reviews that call it skunky … I’m not so sure. Skunk sounds bad. And I wouldn’t say that Corona has anything in it that would make your face melt. Unless you were from Belgium: then I would understand that you’d probably drink your own urine before you cracked an adjunct. And I’m on my way there. I like Corona less and less with each bottle I drink.

Now let’s talk about the lime. Here is a tradition that probably is keeping citrus farmers afloat, or aiding greatly in that regard. You never see a Corona without a lime, unless you’re in Mexico. There, it’s about 50/50. Unfortunately for Corona, I’ve had it without lime, and it was super bland and generic. And I think a beer must be able to stand on its own. So, although Corona tastes good on a summer’s day (note: there are WAY better summer beers), I’m giving it a D. It should be ashamed, brainwashing the American public like that and taking money away from Joe American, the hard working craft brewer.