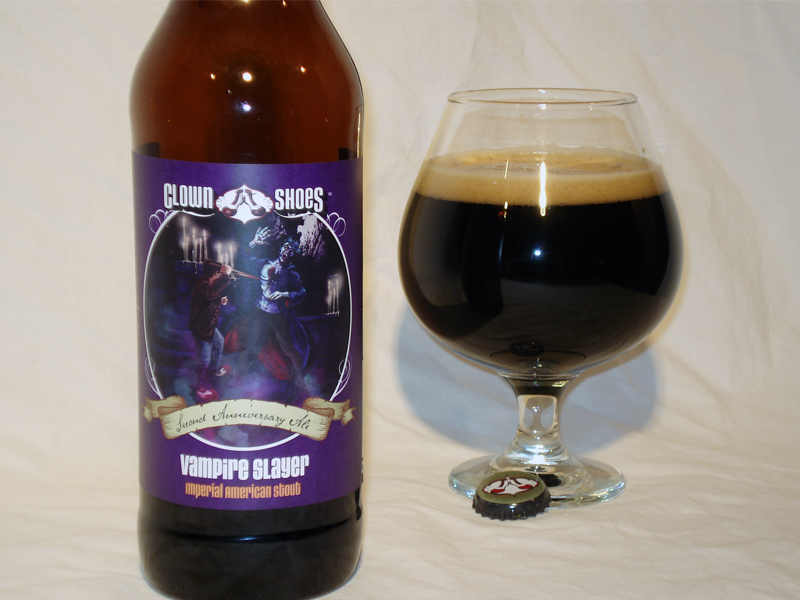 There is a lot that goes into this brew.  Holy Water, lactose (milk sugar), smoked malts (ash and hickory wood), and burnt grains.  The brew day was definately interesting as the brewers did their best to ward off evil vampires.  Not joke, I wrote down ‘chocolate milk’ as one of the taste of this beer and found the video shortly after.  It was kind of cool hearing that they used lactose in the brew..confirms my palate’s findings.

In all honesty, it tasted a lot like 3 Floyds seasonal milk stout Moloko.  The mouthfeel was heavy, sticky and almost syrupy.  However, at times it seemed watery (front of palate) and then velvety (back half).  The burnt grains did not shine through as much as I was hoping because the sweetness of the lactose created a somewhat cloying effect on the palate.  Occasionally I would get a satisfying astringent grain flavor, but for the most part prepare to be sipping on a sweet alcohol bomb.  The smoked malt aspect did help to add some body and another dimension.  However, even with this added feature to the beer, it did not compare to their Blaecorn Unidragon.

I should have expected this to taste sweet after my nose picked up a rather licorice, chocolate  ice cream aroma.  While the sweetness was apparent, the spice and deep roasted grains captured my attention.  Later I reflected on this beer and realized that, due to the label, I was expecting one thing and got a different product than I had anticipated.  I was not prepared for the sweetness.

Happy Anniversary Clown Shoes…unfortunately, I’d rather drink Hoppy Feet or Blaecore Unidragon in your honor.  The sweetness was hard to get past.