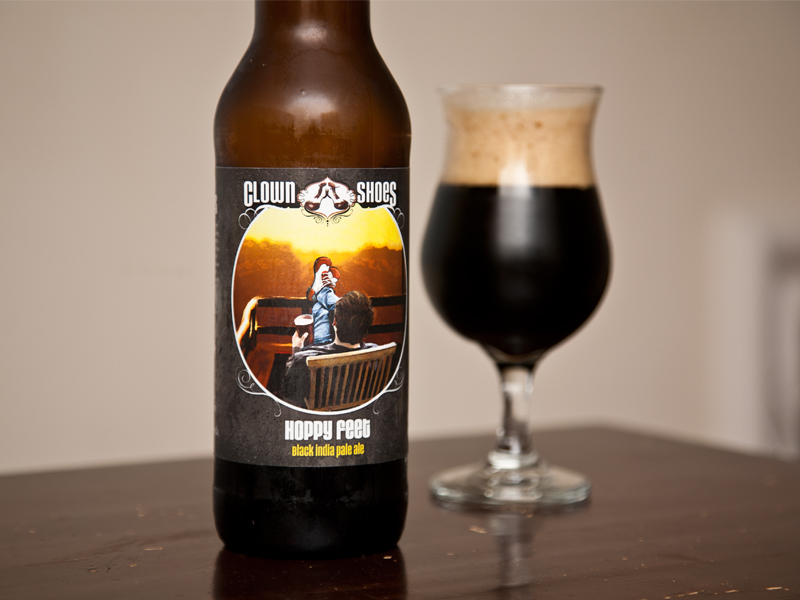 Clown Shoes is currently a brand (not a brewery) that is brewed by Mercury Brewing Company in Ipswich, Massachusetts. It is known for its bold and controversial beer labels. Since it’s now distributed in the Chicagoland area, I got my hands on their Black IPA, named Hoppy Feet. This style of beer is a sort of novelty that’s got some buzz here in the states: making a hoppy IPA on a backbone of heavily roasted malts. I was interested to try this one.

Hoppy Feet doesn’t have a provocative label: just a picture of a dude sitting on the back porch with his clown shoe-clad feet up on the railing. I poured it into my tulip and it developed a nice, loosely frothy light tan head … thanks, hops! This beer utilizes tons of Northwest hops, namely Amarillo and Columbus … so the nose is bursting with grapefruit citrus notes, and is subtly tempered by a nicely roasted malt backbone that doesn’t smell too overpowering.

You take a sip of Hoppy Feet and I think you can be convinced that hops and malts can play together nicely in this style. It doesn’t look like an IPA, but it smells and tastes like one. And then it’s got those different flavors akin to a porter or stout: chocolate and coffee, toasted to perfection. Despite being hoppy I still think of this beer as a balanced IPA, if that is even possible. It’s not the grain bill I’m referring to … it’s more the mouthfeel and overall taste experience. The hops are big up front, give way to some nice roasted flavors in the middle, and then return to the sip with a crisp refreshing finish.

To be honest, I didn’t care much for the label art or any of the perceived buzz surrounding this beer here in the Midwest … but Hoppy Feet is a good brew, and drinkable at only 7.0% ABV. Hat’s off to Mercury Brewing Company for this well rounded “black” IPA.