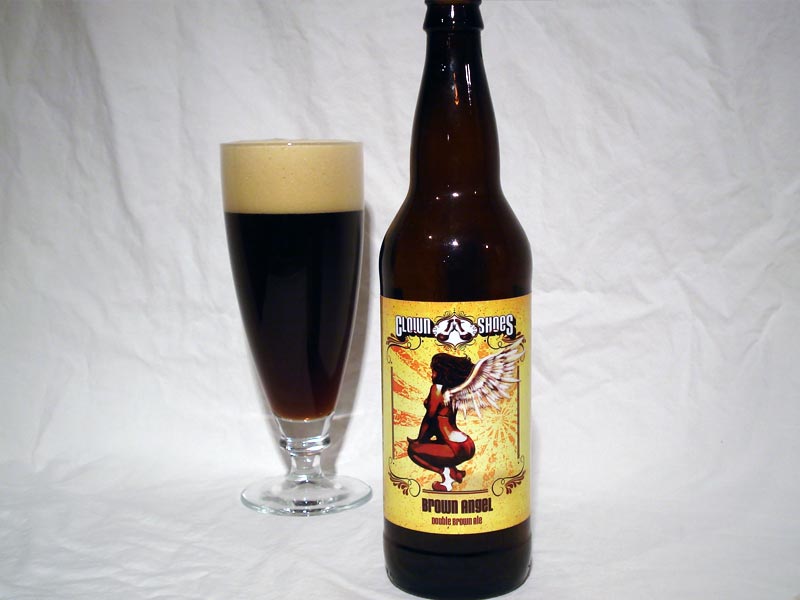 My second go at the Clown Shoes brand finds me sipping on a very comfortable and cozy Brown Ale.  The 2012 winter here in Chicago has been rather mild, so the extreme stouts have not been my go to.  Instead, I’ve been looking for brown ales, cascadian dark ales, and black lagers to give me that warm roasty quality.  If the names of their beers does not get you then some of their labels will.  They tend to be a bit over-the-top, but hey, they are catchy and frankly funny at times.

All external superficiality aside, I poured this brown elixir slowly creating a dense tan head that was pleasantly foamy.  During the pour the color looked like any other brown ale out there, but in the glass it had a deep mahogany hue.  It did seem a little thicker…almost heavier which I attributed to the ‘double’ aspect of this beer.  Towards the end of the bottle I could tell it was unfiltered by the hazy appearance in my last glass.  The head does lace well.

The aroma was not what I expected.  I was bracing myself for huge hops that would overpower the toasty malts.  Instead there were rich chocolate, yeasty overtones that reminded me of an English style brown ale.  Floral notes from the Goldings hops lend a nice honey’d component that plays well against the Maris Otter malt.  The Columbus hops are noticeable in the aroma only as a pungent leafy quality similar to that of Mikkeller’s single hop IPA beer.  Unfortunately, the Amarillo hops get lost beneath all the other ingredients.

What I found in the taste was a creamy milk chocolate and minor astringent grain goodness.  The mouthfeel was full bodied and rich.  The abv is mid-range so it is hidden will behind the higher amount of malts used.  Columbus hops provide a dank pungent bitterness on the back half of each sip, but the roasted malt and yeasty notes mellow it out.  Brown Angel is actually closer to an English brown in my opinion with a slight American twist (higher alpha bittering hop and higher abv).  Overall, this beer is pretty drinkable.  It is smooth, chocolaty, dank and earthy bitterness, and hearty.