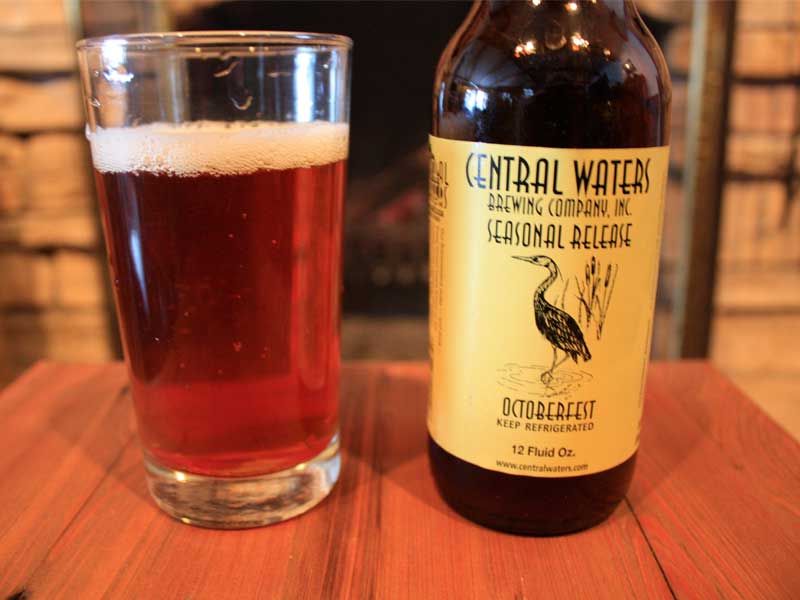 Pours a clear, transparent burnt orange with one finger head, quickly dissipates to a film in a matter of 1-2 minutes. Has the aroma of Munich malt, the typical grain used in the Marzen style. I brewed a Marzen earlier this year (the official style of many Octoberfest beers) and served it at our annual Halloween party. It was one of the more true-to-style beers of my short brewing career, and it was delicious. This style is lagered, meaning it ferments at much cooler temperatures than ales, and for longer periods of time. The result is a cleaner tasting beer and one that is usually, but not always, clearer than some of its ale counterparts.

This particular Octoberfest from Central Waters tastes like it smells- a toffee note backed by that very distinguishable Munich malt character. The emphasis in this style I believe to be not only the character and flavor notes surrounding the maltiness but also the dry, clean easy bite at the end. Designed to be a beer that can be fairly easily consumed, this is an enjoyable combination of malt and hops. Great beer to pair with food and / or occasions where you want to drink more than a few beers- and still actually taste them.

This isn’t my favorite Octoberfest of the ones that I’ve had, but it’s good. Would drink again. And had I bought more than just one of these, I’d be opening the second right now.