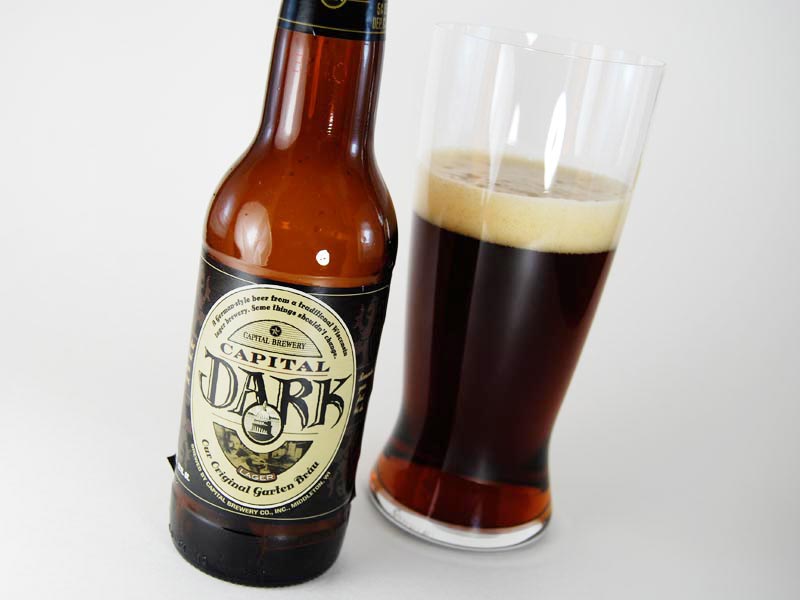 After a B+ pilsner just a bit ago, I was anxious to use the few moments when my daughter was napping to further explore the world of Capital Brewery. On my fifth venture into the brewery’s fine concoctions, I decided to dabble in the dunkel. Titled as dark lager, I poured it into my lager glass and it was, indeed, dark. Visually, the brew presented a one-finger, sandy colored head and a mahogany body, reminiscent of a deep, cherry wood or a light, red wine. The slight head retained, but left but a little trace of its presence, brushing down my glass with specks of sporadic tan.

There was a caramely malt presence, rich and heavy, forcing me to think of a hearty stew or a rich cheese pairing. There was a fruit on the nose as well, but I couldn’t decipher whether it was cherry or citrus, my nostrils partially handicap by the overwhelming smell of tonight’s dinner: bacon, frying on my stove. Gathering all that I could from my repeated, deep inhalations of the beverage, I decided to take a sip. Major bread and malt notes were first up. Then a nuttiness, followed by the same caramel that was on the nose. A bitterness, whether a burnt quality or coffee I can’t tell, precedes the dry, earthy finish. Right before the finish, hidden beneath more bold flavors, is a fruity-sweet note, like a sour cherry, very slight, but nice and deepens the overall complex nature.

While I don’t have an incredibly extensive background with Munich dunkels, this one was definitely pleasing. It seemed as though it were designed to be paired with a hearty meal and I may have missed out on some of its potential, drinking it solo.