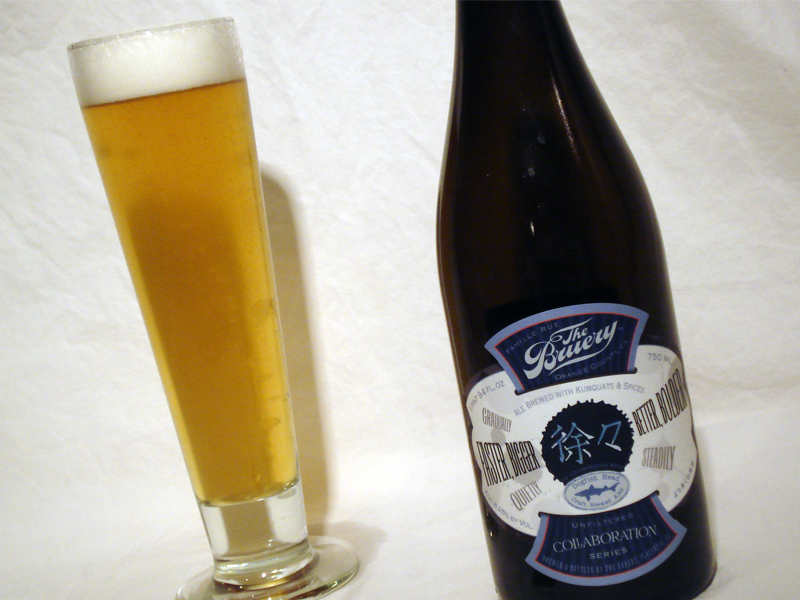 An interesting collab brew that, according to the DFH website, is suppose to strike a contrast between American “bigger is better” and Japanese tradition.  In doing so this beer incorporates Kumquats, a medley of 7 spices called schichimi togarashi, and fermented with the help of sake yeast.  I didn’t know exactly what these ingredients tasted like so I did some research.

Kumquats – an small citrus fruit grown in the Asian region of the world with a sour taste.

The flavors in this beer are very rather big.  Essentially, I found the base flavors to be that of a Belgian Golden Strong Ale (tastes similar to Mischief). However, the  spices and fruit did seems to carry this beer.  The mouthfeel was on the lighter side as the carbonation in the beer was champagne-like.  It helped to keep the beer on the effervescent side.  My thought is that the sake yeast was added in addition to a Belgian strain as there is a definite bready, bubblegum, spicy aspect to the yeast flavor.  Moreover, the sake yeast seems to add this coconut-like aftertaste to the beer which for the most part seemd to smooth everything out.  Very tropical to say the least without the huge citrus notes (passionfruit, grapefruit, guava, mango).  The kumquat adds a little citrus pep to the front half of the taste while the schichimi spices are very noticeable on the back side of the sip.  With regards to the abv, it was practically non-evident yet providing some muscle.

There were a ton of flavors going on in this beer (American flare), but they all seemed to be enhancing a traditional style (Japanese tradition).  It was a lively drink that had some unique ingredients.

The appearance was very bubbly.  I had poured it into a pokal glass, but quickly realized it was better suited in a pilsner glass as to show off the ever-present beads of carbonation rising to form a tight white head.  The color was just like The Bruery’s Mischief – pale/straw gold.  The head was so dense that it looked like whip cream.  I attribute that to the sake yeast.  When pouring the last glass worth there was a cloudy sediment that served to provided a deeper yeast quality to the aroma and taste.

Revisiting my glass before I finished off the last sips I explored the aroma.  It too, smelled like a Belgian Golden Strong Ale.  Yeasty, fruity, bubblegum, some citrus, and a host of herbs.  While the aroma seemed rather complex, it was continuously brought back to the base beer.  An interesting beer for sure that was great for expanding my flavor profile.  It has it’s place as a one-off brew.