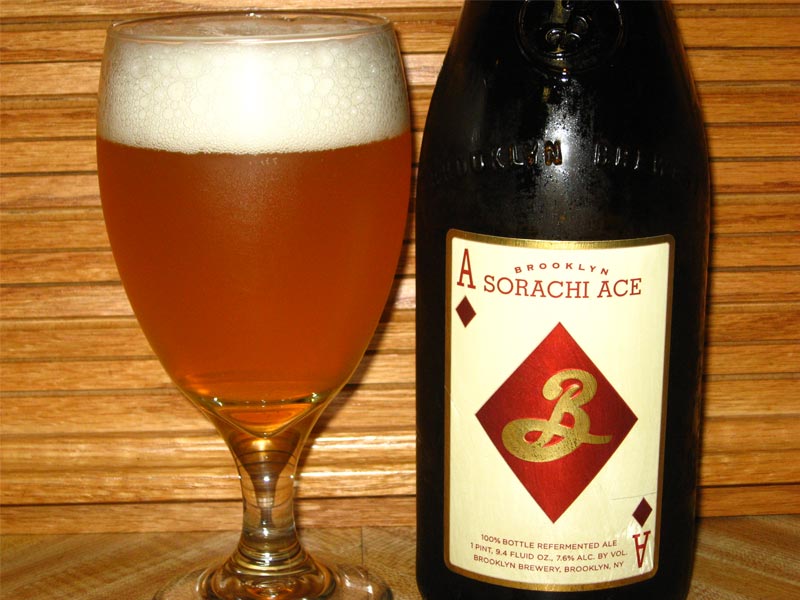 What can I say? It has been a while since my last beer review. The month of July was a busy one with weddings, seeing a roommate move out, and getting around to switching over an internet account. Well, I’m back…and in a big way! The beer I chose for my re-entry was none other than Brooklyn’s Sorachi Ace.

I obtained this beer through a trade with Barry of Craft Brew Advocate (thank you) after hearing about its release.  While it later became available in my next of the woods there were a few reasons why I was so excited to get my hands on this brew a little early: 1) it utilized a different hop I wanted to explore, 2) Brooklyn produces some fine brews, 3) I wanted to sample it sooner than later, and 4) the bottle looks frickin’ sweet!

While pouring this beer I felt as those I had just won a huge Texas Hold’em event with the Ace of diamonds on the river. There is a wonderful almost clear pilsner-like quality to the color of the beer, but possesses the typical fluffy white head that you find in Saison. It holds a consistent stream of bubbles almost like champagne which keeps the delicate white head alive.

The aroma was pure floral as the yeast and hops converged into my nostrils to produce a mixture of orange and apple blossoms, a spicy herbal aspect, that was complimented by a sharp citrus lemon smell from the Sorachi Ace hop. One might say it could smell like a cleaner with a hint of lemon freshness, but I would argue that this hop compliments the Saison style.

When I got to the taste my nose had already picked out the flavors for the most part. Bubblegum, a straight forward light malt aspect that allowed the yeast and hops shine. There is a spicy kick at the beginning that is accentuated by a sizeable hoppy bitterness.

Sorachi Ace seems to have been bred in Japan and has a higher AA% making it a great bittering hop, but its flavors are lighter or mellow (i.e., not as pungent). The middle of the brew is tingly as the carbonation takes over leading into a floral/lemony finish that leaves a spicy medley on your palate. It finishes very dry, but brings you back for more as it is light and quaffable.

Relatively complex, I enjoyed exploring what flavors and tones the Soraci Ace hop added. I’d suggest using them in a Belgian brew as it will pair well with that spicy, herbal yeast component. The design sure gets some mad props!