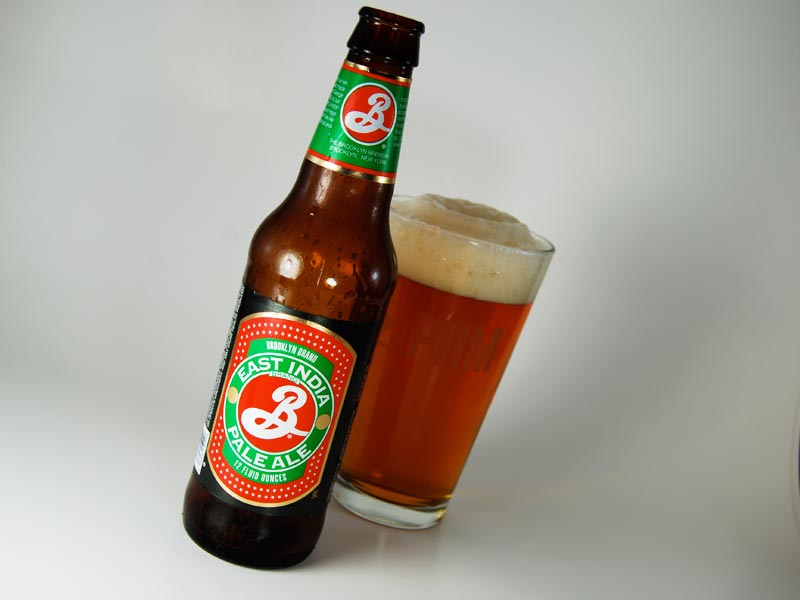 Michael:  Garret Oliver has always been a bit of a beer god to me. Not because I respect him or know him or have even had a single one of his brews. I just feel like he is everywhere, gracing the cover of All About Beer or found in this week’s ‘Food’ section pairing some hard-to-pronounce appetizer with a fine double IPA. And so, here begins my foray into this beer god’s craft, stripped of the flowery descriptions and in-depth interviews about brewing culture. Just me and his beer.

Brooklyn’s take on the English IPA pours a clear as can be dull amber. It is an orange, just inching in to brownish red. The head, which set atop like a pitcher’s mound, was a bright off-white. The lacing was a beautiful, thick froth that didn’t just streak, but coated the side of my pint.

The nose was maltier than expected, that was the initial impression, the hops mixed with bready, biscuity aromas and were basically dominated. I swirled my glass several times and eventually a bit of lemony citrus wafted out. The sip was somewhat shocking. The lasting finish was the lowlight, a bark-like linger that was biting, harsh and unpleasant. It was not the earthy quality that, when found in correct proportions, can be enjoyed. No, this was like running full speed into a redwood tree and having to pick the bark from between your front teeth. Besides that, the citrusy hops were still there, but so dominated and over run by the bark that they were soon a distant memory.

Mr. Oliver, although respected for what may be perfectly legitimate reasons, has let me down in this first encounter with his Brooklyn Brewery. With as much good press as he’s had, however, I’m sure I’ll be back to sip something from Utica’s finest again.  Grade C

Tom:  My first impression of this beer was not the best.  The word bland came to mind.  Not with regards to the flavor so much as the overall experience.  I understand that they were going for an English IPA here, but for some reason I just could not really get on board with this beer.  Like Michael, I too was not expecting the malt aspect of this beer to be as big as it was.  There was a classic honeyed aroma and flavor found in most English ales, but the caramel and toffee notes overtook hops.  Speaking of which, when it came to the hop profile my initial thought was that of New Holland’s Mad Hatter.  More dank and grassy combining with the malt to lend an overall leathery musty smell.

When reflecting on the taste and mouthfeel I do remember the hop did coat my palate but did so in a mild manner.  Nothing too crazy or even eventful.  They were just there.  The latter half of the ship comes alive a little more with a spicy hop finish that is dry and herbal.  From what I expected from Brooklyn this IPA is a rather average brew that has its place their line up, but would not be my first choice when picking out some Brooklyn beer.  Grade B-