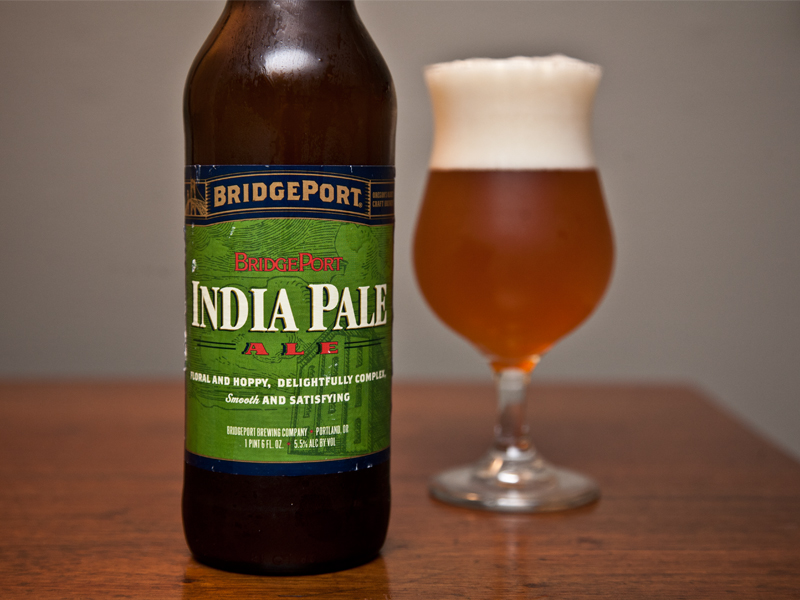 Tom: Browsing through an aisle at Binny’s stumbled upon this little beauty along with its older brother Hop Czar. I had never seen or heard of this brewery located on Oregon before so you know that meant…give it a try.

BridgePort is the oldest brewery in Oregon established in 1984 under the name Columbia River Brewery. It produces roughly 100,000 barrels a year and could probably be considered as one of the forerunners in the American craft brewing scene.

From their medium sized line up this IPA was first brewed in 1996. Using a variety of five hops this beer is not what one might expect. In fact, I was intrigued by this beer the more I sipped on it. It is bottle conditioned (they say double fermented) so the pour is lively and fizzy with no sediment at the bottom. The head consisted of larger bubbles that are then replaced by a constant stream of carbonation. It looked more like a Saison than an IPA as it had a straw-gold hazy hue.

When it came to the aroma the bottle description of effervescent and floral is no joke. This IPA is one of the most floral I’ve ever had. Producing hints of lemon, straw/grass, a slight pine spice and orange peel it did come across as Saison at first. There was a bready yeasty quality that was fresh and not found in most beers of this style.

The taste is refreshing as the medium body mouthfeel is brought to life with a tingly palate cleansing carbonation. There is a minor hint of Lysol, but for the most part that could just be the lemony spicy in my nose playing tricks on me. While it is hoppy, they carry a smooth, easy going bitterness that is mellowed by the bready quality. With a Pale Ale abv percentage you could drink this all day. The finish is floral and honeyed with a minor piney touch of hops and pale malt sweetness. A beer to try as it is an interesting interpretation of this popular style. Grade: B

Taylor: I enjoyed a full bomber of this recently along with a dinner of homemade beef tacos. I’m going to agree with Tom’s review and grade: here is an American IPA brewed in the “craft beer Mecca” of the USA: Portland, Oregon. It’s the little brother of BridgePort’s awesome Hop Czar Double IPA. Highly citric and piney on the nose, excellently carbonated and fresh. Has a damp, grassy quality that stays through the sip. It seems to be a well balanced IPA, with only 50 IBUs it is not overly hoppy. You get the hops up front and the sweet malts at the back. Very, very drinkable. A great summer brew, served ice cold. Grade: B+