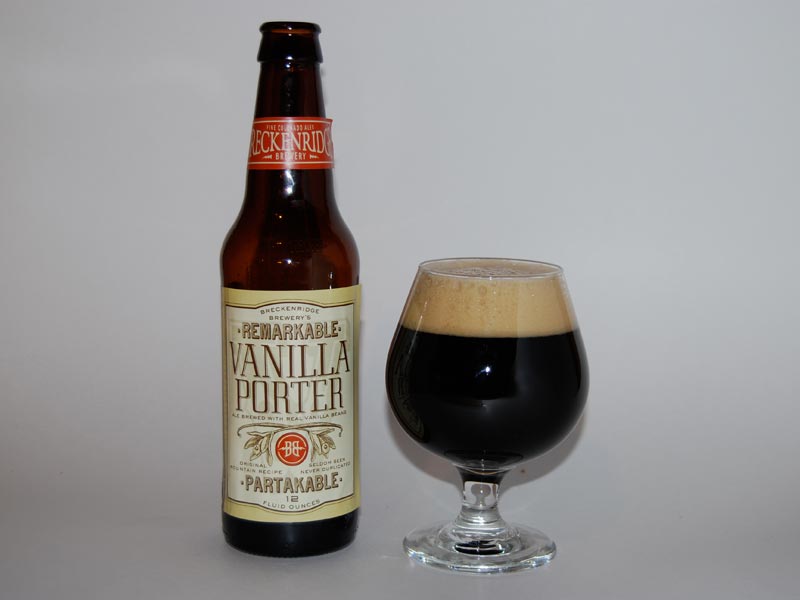 Drinking a beer is all about perspective. A few of my friends got together and enjoyed a few pints last night and, of course, talked beer. One of the brews in my fridge came up in conversation, the Breckenridge Vanilla Porter. I had tried it, twice actually, and was so disappointed I neglected to review it, thinking maybe the next bottle would be the real winner. Well, I guess I was right. With a simple suggestion from one of the Perfectly Happy Men, I allowed the porter to warm up a bit and as it did, it not only mellowed, but became increasingly more smooth and complex. Trying it this final time, I was open-minded, expecting something different, and I was most pleasantly surprised.

It poured the same as the first two times, coming from the bottle as a medium brown and settling into the glass in a pool of deep dark, chestnut. Circling the rim of the glass was a thin tan head, that left streaks down the side like rain down a windowpane. The vanilla nose was present, as it was the first time, but even the few degrees of warmth compared to my maiden voyage with this brew, forced the scent out of the glass with more intensity. Upon first sip, I was preparing for a new experience, letting my tastebuds be the critic instead of my mind. I was pleasantly surprised. The metallic flavor that was overwhelming the first go-round, took a back seat to a creamy, smooth vanilla delight. There was practically no carbonation, just a few bubble grazing the back of my throat after each swallow.

While Breckenridge hasn’t made the most incredible, dynamic, complex porter there is, they have made a solid beer, with enough positives to take a second look, or third I guess, if you’re me.