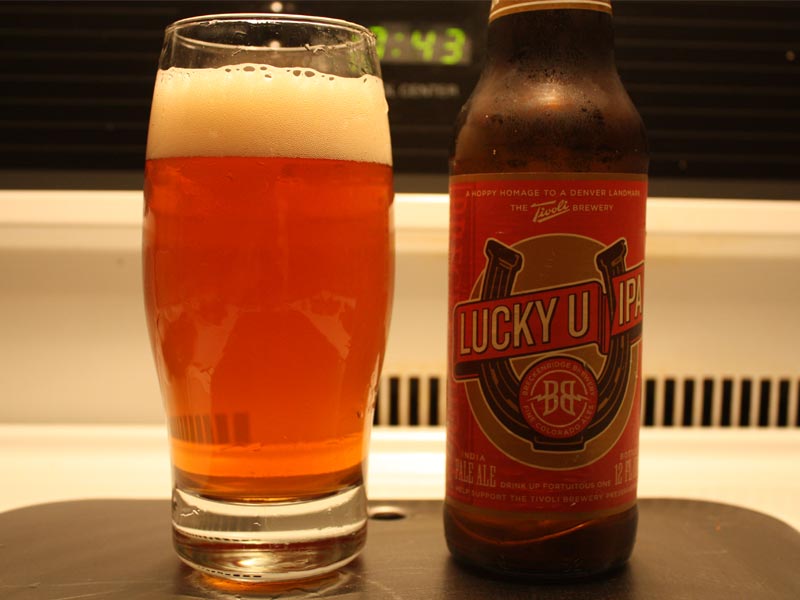 Thanks again to Steve in Colorado for another round of beers. Lucky U is a beer I thought was available only out west but on a recent trip to Binny’s I spotted it on the shelf. Here are my thoughts.

It pours a beautiful, clear copper color with a one finger head that disappears quickly to a film. Some decent lacing has started to form along the sides of the glass. The aroma is an interesting mixture of hops and malt, but a grainy malt note seems to dominate. It could also be an earthy hop note mixed in. I also pick up a bit of an alcohol aroma. There are some floral aromatics at work, but really nothing too impressive with such an extensive hop bill that include Amarillo, Perle, Cascade, Apollo, Magnum, Fuggle, and Goldings. I’m pretty surprised.

The taste is that of an IPA that lacks a punch. There are hops and a decent bitterness, but it lacks the flavor depth that I enjoy in such a wide ranged style as IPA. There is a malt backbone present, but it simply lacks the complexity of flavors that is so possible for a beer like this. The carbonation is well done and right in the middle range. The bitterness tries to dance on the tongue and succeeds; it just lacks a superior flavor that is so often associated with this style.

Overall this is just a run of the mill IPA for me. That’s not to say it doesn’t have a place in my beer world. On the right day I could see really enjoying this beer as it certainly does have a drinkability that I don’t attribute to every IPA I taste. It goes down easy, has a good mix of flavors, and is clean throughout. I’m interested in trying more beers from Breckenridge.