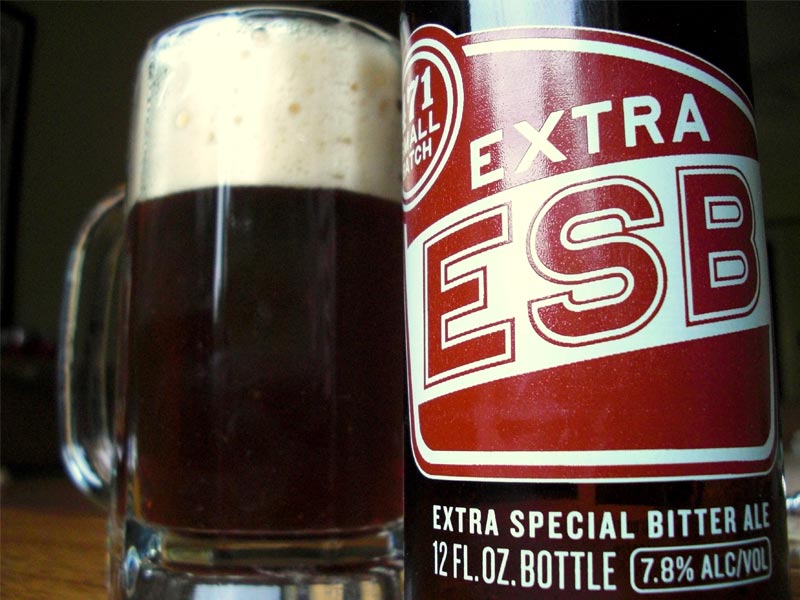 Tom: Having never visited Colorado I’m forced to vicariously experience the rocky mountain grandeur through their beer. One brewery that has been gaining my support is Breckenridge Brewery. They have an extensive lineup and produce a couple “small batch” beers that belong to their 417 Series.

Being a fan of ESBs, their Extra ESB bomber caught my eye while gazing the aisles. On their website they call this a Stong Scottish Ale which might simply due to the fact that they use a Scottish Ale yeast, but I think I would fitting to call it an Imperial ESB.

Classification aside, I was not disappointed by this brew. It resembled an English ale found in pubs with a deep copper-brown hue, low carbonation, and a creamy 2-3 finger head. There was a piney, spicy, earthy floral hop nose due to the use of Chinook and Fuggles hops. The malt components did shine through, but the aroma was dominated by the hop aspect.

Drinking rich and smooth, this beer is definitely hardy. The amber and crystal malts added a great caramel, toffee, nutty, and roasted grain flavor while the small amounts of roasted barley gave a little tease of chocolate. The bitterness was apparent, but it had a clean finish. I did notice a down-to-earth herbal taste which might have been because of the Scottish yeast used. One interesting flavor that surprised me was a light smoky or peaty note that is found in Scotch.

The mouthfeel was full-bodied, chewy, and the malts seemed to settle on the thick side. Boasting an ABV of 7.8% there was a minor warming effect similar in seasonal winter brews. It had relatively good balance making it pleasant to drink. Grade: B-

Noel: So this is my first “Breck brew”, and I’ve gotta be honest: it’s a winner. A small batch, extra extra special bitter that’s actually a Scottish style, not English; a welcome surprise to me. Don’t get me wrong, I love English beer…but I have thoroughly enjoyed the handful of Scottish ales I’ve tried (Founders’ Dirty Bastard, Summit’s 90/- Scottish Style Ale), and am always itching to try more.

Breckenridge Extra ESB pours a dark reddish brown that I think is very distinct to Scottish ales, with a thick, foamy head. My glass had a good deal of sediment in it as well; perhaps that’s just the nature of bottle conditioning a small batch beer. But don’t let it deter you from knocking one back; this beer is extra extra special for a reason.

“Extra special” really just means the same thing as “Imperial” or “Double”: stronger. So for an extra extra special, I have to admit I was expecting more than just 7.8% ABV. But this beer is no slouch; and the complexity is what really sets it apart. There is sweetness throughout from the alcohol and malts, which are akin to burnt caramel and molasses. But a great dose of bitterness (55 IBUs) from the hops at the back end for balance and a nice dry finish. It smells sharp and sweet, almost vinegary in a way. And the higher ABV and malt presence give the mouthfeel a distinct smoothness that I’m beginning to realize is a hallmark of Scottish ales. To be honest, after tasting this Extra ESB, it’s no wonder that the style originated from the same country as Scotch. Scottish ales are to beer what Scotch is to whiskey: strong and smooth, but possessing a unique dark, sweet, smoked wood malt profile that makes them incredibly enjoyable to drink. There’s something about this beer that fits perfectly with the mountains, rain, and misty moors of Scotland that exist in my mind’s eye. It’d pair perfectly with a cigar or pipe.

If there’s anything to hold against this beer, it’s the price tag: $17 for a six-pack. But I think it’s worth breaking the bank for at least once. Grade: A-