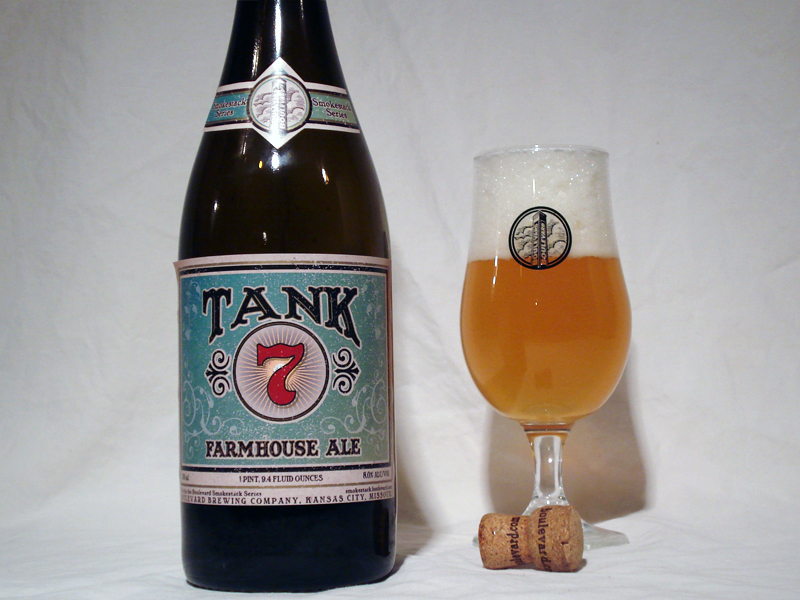 Wow!  I have not had such a good reaction to a beer for some time.  This beer is legit!  Boulevard takes a classic older style and puts a little new age flare to it…and in a good way.  Named in honor of fermentation vessel #7 which apparently produces a medley of aromas and flavor.  I’ve had a few Saison/Farmhouse Ales in my time and I must say that this beer stands out in all categories.  Allow me to explain…

The aroma on this beast is outstanding.  Classic notes of hay, straw, bubblegum, an effervescent yeast quality, and barn will greet you.  However, it does not stop there.  Big hoppy notes of grapefruit shine through as if it were a 3 Floyds brew.  Lemongrass, lime, lemon peel, white pepper, sage, fennel and coriander round out the light, spritz-y, and refreshing aroma.  It almost hints towards a Belgian Wit due to the wheat used, but the yeast strain brings it back to that of a Lambic.  Spicy, up-front, and lively Tank 7 is a knockout.

I poured a clear-hazy straw colored glass which had a very vivacious head which rose quickly.  It was slightly rocky at first, but as I pour more into the glass it became a dense white fluff.  Not as dark as Saison DuPont it looked crisp and dry.  Moreover, it was not as hazy as North Coast Le Merle leading me to believe that the flavor was found more in the hops than yeast profile.

The flavor.  Dynamite!  When enjoyed at colder temps this beer is crisp, clean, and dry.  When sipped at warmer temps, you’ll find the floral and spicy dimensions open up.  Big grapefruit notes from the Amarillo hops suited my palate nicely (one of my favorite hop varieties).  While the aroma was effervescent, the mouthfeel was creamy.  Lemon and grassy notes carry throughout the sip as the yeast added life.  Interestingly, the abv took a very dangerous back seat as it was not noticeable.  Clean, crisp notes of hops blended perfectly with a lighter wheat body.  I’d say this is like drinking a combo beer made up of Berliner Weiss, Saison, Lambic, Belgian Wit, and IPA.  It finishes on the dry side which brings with it that white pepper spicy that folds into a hoppy/yeast aftertaste.  Tank 7 is one that sets a high standard, even for Belgian beers, to live up to.

Note:  Tradition is a variety of hop that was created in German from Hallertau Mittlefruh.  It has much of the same qualities – grassy, herbal, and spicy.