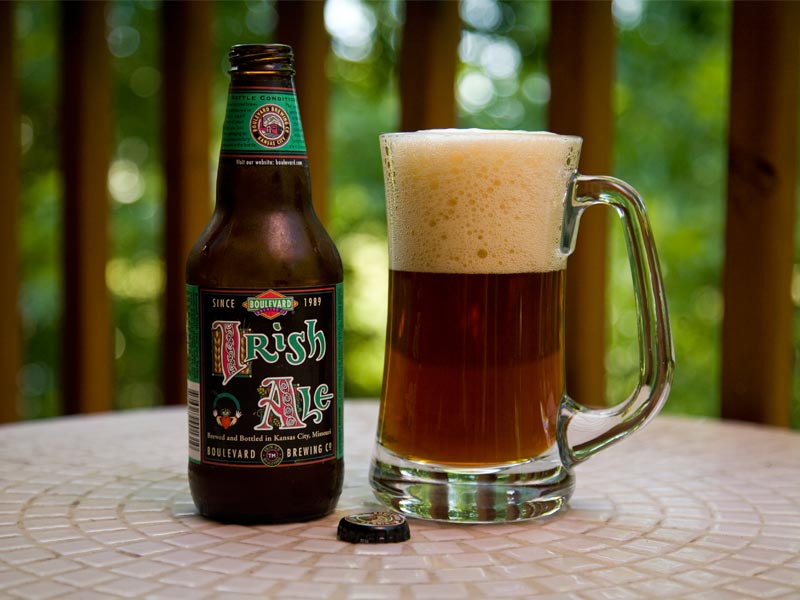 Taylor:  In the humble state of Missouri there lies a brewery called Boulevard that makes a really good Irish Ale. Boulevard Brewing Company’s Irish Red Ale found my glass on a hot summer evening after waiting patiently in my refrigerator. It comes in a short and unassuming brown bottle … a seasonal brew from Boulevard that stands at 5.8% ABV, or 13.5º Plato. From the very start, I was excited. I enjoy Irish Red Ales.

This Irish Ale poured a rich red-brown into my mug (a favorite for malty ales). It was deep but clear, with a foamy, big-bubbled tan head that launched a wonderful aroma into my nose. As a self-proclaimed Midwestern tribute to the classic Irish Red Ale, this Boulevard concoction is brewed with Pale, Carapils, Caramunich, Caravienne Aromatic and Chocolate malts. The hop profile includes Magnum and Saaz. What a wonderful nose! Malts dominate, and I could really pick out the caramely, chocolatey malt notes. Yet the hops prevented the sweetness from getting too far ahead, and contributed a subtle herbal spiciness that I thought really complemented.

I love the Great Lakes Eliot Ness, which of course is a Lager and not an ale, but the two beers are much closer than one might think. Similar malt profile, with the Ness being just a bit bigger in ABV and IBU. While Lagers and Ales are brewed differently, the two beers are still very similar. And I like that.

The taste of this Boulevard Irish Ale is outstanding. Drinkable, refreshing, nicely malted, not too heavily alcoholic, and well balanced. What a great beer this is. It would hold a consistent place in my fridge if only it were available in Illinois.