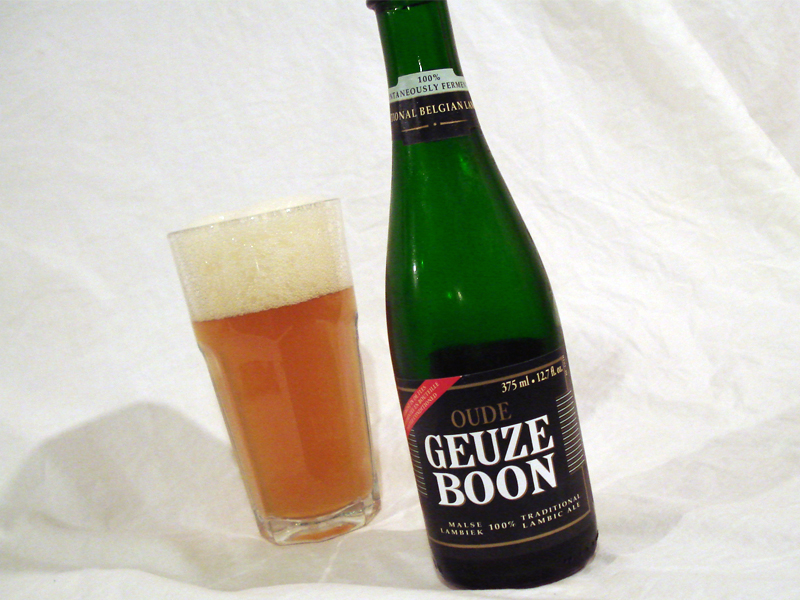 Reflecting over the last few months my taste for Lambic beers has taken off.  Boon’s traditional Geuze finds my palate after sampling their Mariage Parfait (a vintage blend) and some of my favorite gueuze beers from Cantillon, Drie Fonteinen, and Girardin.  I’ll be honest, this brew quickly found its way to my top five effortlessly.  It is a quality sour that is elegant, yet gutsy.  Allow me to explain.

The appearance was classic to the style with its hazy golden yellow hue and fast forming rocky head.  Something I found interesting was that the color on the edges of the beer had a white wheat color similar to what I found in the Bruery’s Hottenroth.  I guess that makes sense actually since they are both wheat beers at their core.  Nonetheless, the look was typical.

When I came to the aroma and taste the two when hand in hand.  What you smell is what you taste.  A sharp tartness greeted my nose that was fruity and slightly candied.  Lavender, apricots, peaches, hay, straw, lemon grass, old barn, and funk where additional highlights to the aroma.  The wild yeast was bready which combined with the wheat gave the beer some body.  My taste buds fired on the sides as the sourness brought with it a refreshing quality.

Frank Boon blended this well as both old and young lambic compliment each other will with a fresh liveliness and sour/bitter edge.  The finish was not as puckering as one might hope, but I found the sourness was found more in the middle of the sip.  Still, I was left with a light wheat aftertaste that followed the champagne-like mouthfeel.  This beer does have drying component which I’d attribute to the 2 years of aging in oak barrels.  It was here that the bacteria and yeast worked their magic to bring you a very enjoyable beverage.