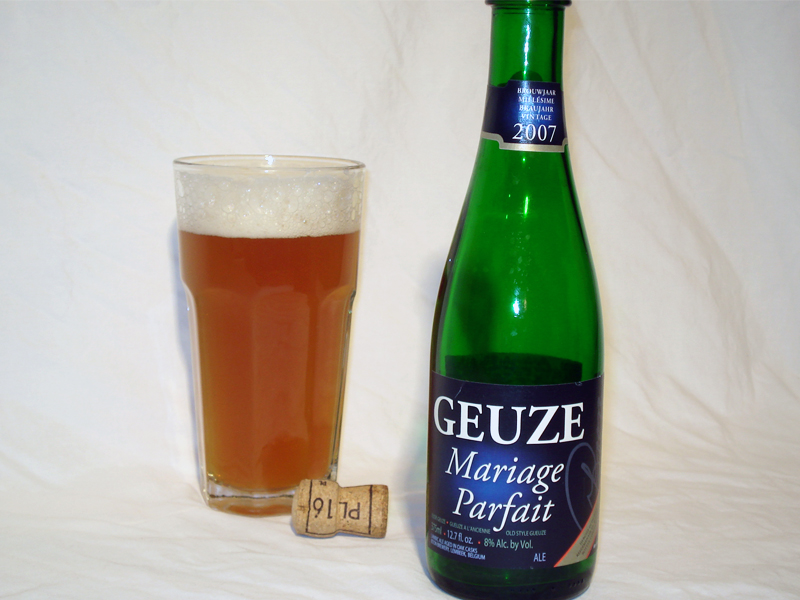 A perfect marriage or harmony.  That is what you have here.  Unlike Boon’s standard Geuze which is a blend of young and old lambic, this beer is a blend of 3 year old lambic.  Therefore it is a vintage beer blended by the brewers for the purpose of pure enjoyment.  It is suppose to be their premier product.

When looking at this beer in the glass you will find that it is made in the traditional fashion…unfiltered.  It is very hazy and boasts a classic rocky white head that is quick to form as it is equally quick to fade.  The carbonation level in this beer appears to be lower as it does not contain that young lambic to help with secondary fermentation (it still takes place in this beer too).  It was a tad darker displaying a more golden hue as apposed to the lighter straw color of their oude geuze.

I could notice a difference on the aroma.  This blend had much more grassy, hay-like, herbal, barnyard and horse blanket smells than the other.  It came across more mellow…old.  There was still that sour acidic component, but not as strong.  There were additional hints of cinnamon, pineapple, coriander, and pepper.  It was rather citrus in nature, but like most geuze that was lemon.

I enjoyed the taste.  Very refreshing as this was more balanced than previous gueuze sampled.  The sour/tart aspect had its place and helped to define this beer, but the more earthy citrus flavors were allowed to present themselves more.  Very much a lambic that showcases the grassy, herbal, barn character I would say this (or other MP vintages) should be sought after for that focus alone.  A straight forward geuze, with plenty of flavor and drinkable for the abv.

Preferably, I would have liked it to be a little more sour or tart, but true to the label it was essentially a harmony of flavor.