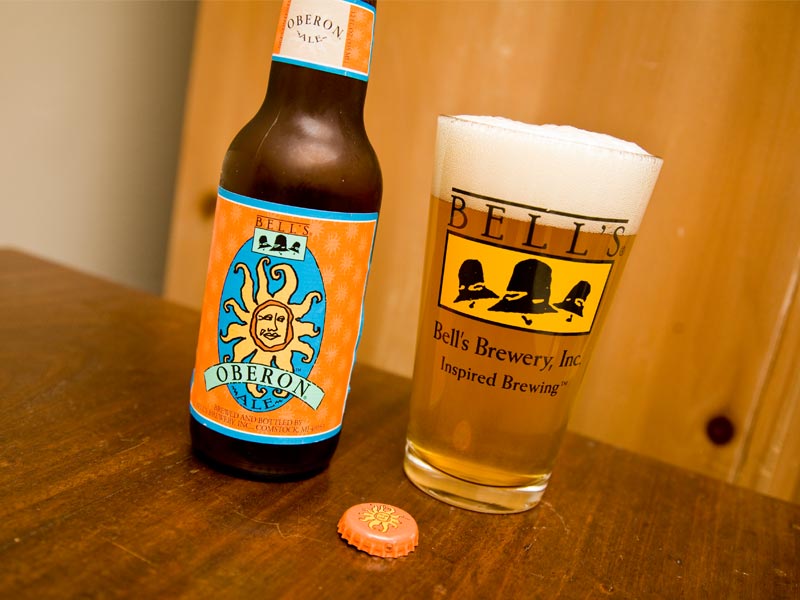 Oberon Ale is a summer seasonal American Wheat Ale brewed by Bell’s Brewery in Kalamazoo, Michigan. ABV is 5.8%. Sold in bottles, kegs, and mini-kegs. The following are our thoughts on this popular summer brew:

Britton: Cubs opening day, hitting a bucket of golf balls at the range, and my first Oberon of the year … today was a great day. It was a great day because these are three things that signal summer is near. Living in Michigan, we hibernate indoors for the winter months. When I see this fantastic, summer seasonal by Bell’s in the store, I know that the weather is thawing and we can head outside once again.

Oberon was one of the first microbrews I ever had years ago, so it will forever hold a special place in my heart. While I first had it on tap served with an orange, I now prefer it fruit-free to enjoy the pure taste of this wheat ale. This year’s batch is as good as always. It pours a cloudy, golden-orange color that Bell’s claims is the color of a sunny afternoon. There is a very foamy head that lingers on top. The smell is strongly citrus with a bit of hops. The taste is predominately spicy orange. There is a little bit of a hop taste but is very refreshing. The finish lingers for a bit with a grainy mouth feel.

This Michigan favorite is a guaranteed winner if you bring a six-pack to a summer cookout. If you really want to impress your friends as you grill burgers this summer – bring an Oberon mini-keg. Grade: A+

Taylor: Bell’s Brewery and I are in a mostly love, sometimes hate relationship. On my way through their lineup of beers, it’s averaged out to me enjoying 1 out of every 2 beers they brew. It’s finally warmed up here in Chicago, and even though it’s rainy season, I decided to crack open an ice cold Oberon. The enjoyment of this beer begins with its label … I think one of the best summer labels out there. Bright blue and orange, with a sun staring out at you. The whole bottle says summer to me. A lot of Midwesterners swear by this beer during the summer months … it’s become a pretty trendy brew.

Pours a nice rich golden straw color, with a bubbly white head that reduces pretty quickly to nothing. Significant lacing down the side of the pint as you go along. The smells of citrus, like orange and lemon, but not super strong. And of course there’s the grassy wheat tone as well. Upon tasting this beer, I think most people who look to American Wheat Ales during the summer will agree that it delivers standard flavors. It is sweet and refreshing, not at all bitter, highly carbonated. Finishes with a sweetish taste, doesn’t really linger at all. Brewed with Saaz hops for spiciness, but I couldn’t find any spice in the taste at all. While I didn’t drink them side by side, it really just reminded me of Goose Island 312, an equally trendy beer from one of the nation’s finest.

While it would seem that Oberon has a lot going for it on the outside, I actually found this particular bottle lacking in wow! factor. I would say that its flavor profile is somewhat flat compared to my all-time favorite summer beer, Samuel Adams Summer Ale. I have had better bottles of Oberon. Thankfully, I have 5 more in the fridge. Oberon is a good summer beer to have on hand for whenever. But it’s not at all my first pick, and I think Oberon should make it better if it’s going to be the poster child of their operation. Grade: B