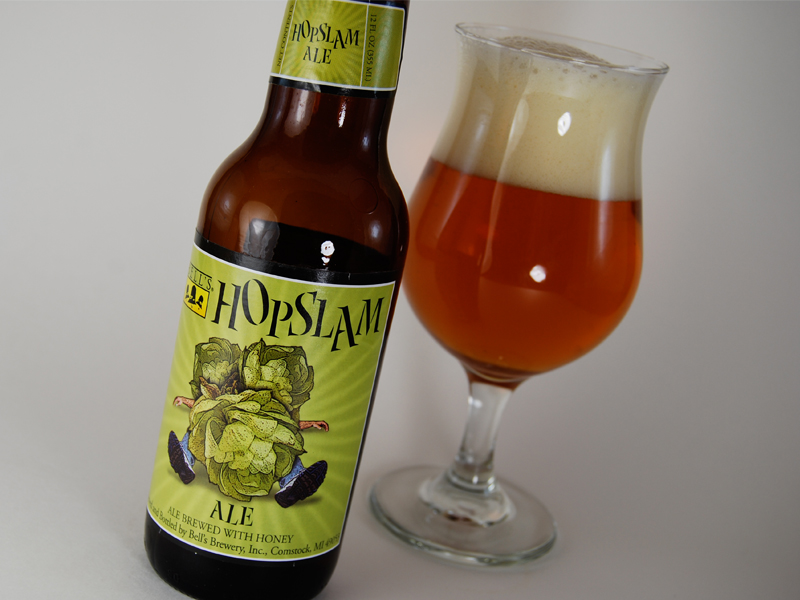 Taylor: Hard to believe it’s been over a year and we still haven’t reviewed this beer. It’s Bell’s Hopslam Ale … one of the Midwest’s über-hopped brews, “a biting, bitter, tongue bruiser of an ale.” Granted, this is a winter seasonal and sells fast … so it isn’t the easiest to lay hands on, even in a town where Bell’s is distributed. Needless to say, I fell into 3 bottles of my own … thanks, of course, to my resourceful PHM amigos … and I’m losing no time in writing it all up.

This review need not be complicated: Bell’s has made us all a thoroughly enjoyable Double IPA, a beer that’s cram-jammed with a bunch of hops (6 varieties), finished with liberal Simcoe dry-hopping, and cranked up to 10% ABV. The label shows a picture of a mondo hop leaf totally obliterating some poor dude. The label itself is thoroughly green. Before you even crack one of these, it’s obvious that Bell’s simply created a mouth-smasher Double IPA to satisfy that significant percentage of beer lovers in America whose crack is … hops. After all, the US of A is rife with hopheads these days. As well it should be.

On to the one I drank. Poured it into a (sigh) tumbler pint; wished later I had used a snifter or tulip but oh well. It didn’t really matter because the nice foamy head and HUGE nose blasted me nonetheless. Hopslam is a great smelling beer. It smells like … American hops. Citrus and pine. Fruit and flower. Mega Simcoe. And through it all … a honey-like sweetness that makes my mouth water and the back of my throat tingle. I may as well just skip the beer altogether and nosh on a grapefruit rind covered in pine sap. This is going to taste awesome.

It does (taste awesome) … I really like this beer. It’s aromatic, fiercely bitter, fresh, and even sweet, with resinous mouthfeel and a lingering finish.

Bell’s Hopslam is for people who really, really, like hoppy beer. And no one else. It is made by a stand-up brewer, and it is purposefully exclusive. Considering the natural qualities of hops … this brew is almost medicinal. You don’t drink lots of it … one bottle was enough for me. Its ABV heaviness and the malt backbone that gives it its sweetness are filling, but all those hops make it oh so refreshing as well. And since hops are natural preservatives, maybe it’s possible that enjoying one will add a few extra hours to your life span. Grade: A+

Michael: Winter IPA releases are anticipated in the Midwest like five-year-old on Christmas morning. There is waiting, there is asking, there is rushing to the store. My timing was lucky, I had a few minutes after lunch last week, so I stopped in my local Binny’s to see what was new on the shelves. Hopslam had arrived, in both sixers and mini-kegs. While the limit was a case, I knew I needed no more than six, so I contentedly grabbed my handful and went home.

Upon the writing of this review, I have already had one. My initial sampling came with too much busyness to write, but enough time to drink. And enjoy. While regarded on the interweb as one of the truly greatest beers in the world, my expectations were, needless to say, a bit high. I love the way a good IPA looks, and Hopslam was no exception. With an immediately billowing head, that maxed out at over two fingers, the beer was a pulpy, fruity, almost gelatin like character. It was orange to be sure, with swirls of brown and deep golden. The head, as I said, was notable and a pure sandy white.

The nose held a ridiculous aroma. From grapefruit and solid citrus hints, to a huge floral bouquet, it was exquisite, seriously. I felt like I was walking through a tropical garden or citrus grove. I wanted to chew the scent, it was so good. The taste was exceptional as well. Here, I could see the honey, smooth, sweet and accenting the hops well. The bottle describes it as a ‘tongue bruiser,’ but to me, I’ve had hoppy beers that have assaulted me with much stronger, more bitter, less well-crafted use of hops. This one is just the opposite. It is eloquent in its use of hops, not being subtle or hiding that it is indeed a double IPA, but doing it in a way that rather than ‘hops for hops-sake’ it uses them in a way that adds to the overall impression of the beer.

For a guy who would normally rather have a stout over an IPA, I will definitely return to Hopslam. I hope its not too late to go get my case maximum… Grade: A

Noel: For all its hype, Bell’s Hopslam Ale still delivers…and then some. It’s gloriously dry-hopped (Simcoe, Simcoe, and more Simcoe) and deliciously bitter, it’s potent at 10% ABV, and it’s remarkably fresh and crisp while still boasting a serious malt bill and also some pure honey. With hop resins exploding on your tongue, it’s hard to even make out all the flavors. But citrus and floral notes abound, with plenty of alcohol and lingering sweetness in the background. It’s hard to think of many Double IPAs that can hold a candle to this beast, and that’s probably because there aren’t many. Buy it. Revel in it. Share the love. Grade: A+

Tom: This beast of an Imperial IPA has a stunning lemon/lime aroma on the nose right out the gates. Hints of freshly peeled oranges or orange rhine add a zest to the citrus dimensions. A light touch of caramel and a sugary sweetness help to boost the fruit aromas and lend some balance to the brew. At colder temps the smell is more sharp citrus notes, but as you let it warm more of the honey qualities start to come forward. The appearance is a golden-orange hue with a moderate head. I’ve poured this beer a couple different ways and found that when you pour for the least amount of head the hop resins are retained more in the liquid. Otherwise, they cling to and escape in the head. A delicate swirl will show some legs. To the taste, it is rather approachable for being such a big beer. The hops do leave a tingle and bite the length of your tongue, but the honey added gives a nice soft touch to the palate. It also draws out the floral aspect of the hops. A minor toastiness in the malt lets you know it is there. The finish is boozy and strictly resinous in its assault. I found that right before the aftertaste there was a slight tang that reminded me of the orange marmalade jelly my dad would put on his toast in my youth. Grade: A