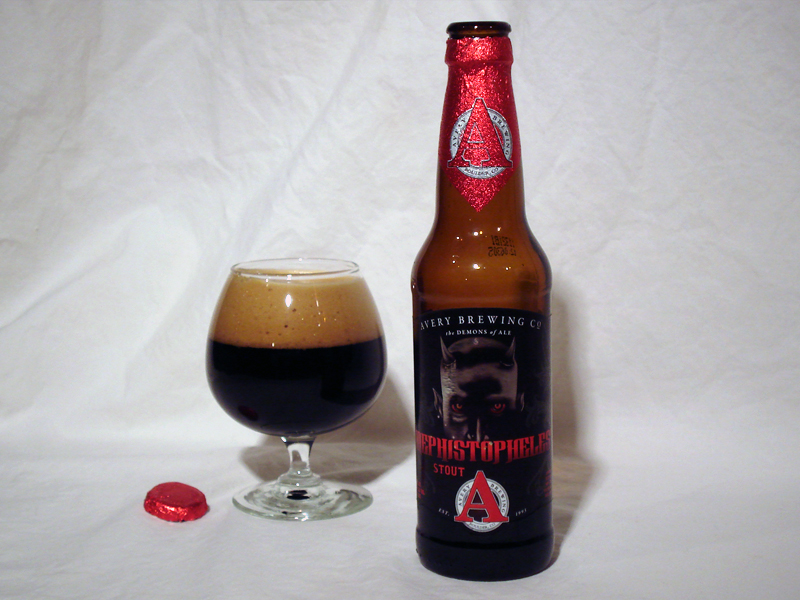 2011 Vintage:  The last in the Demon Series of Ales by Avery.  Complete damnation!  Similar to Noel’s review of The Beast, I got owned by this beer.  Coming in at an alcohol level which rivaled that of BrewDog’s intense beers, Mephistopheles packs more than a punch.  It is like a nuclear bomb on the taste buds.  That said, it is hard to drink a few ounces of this beer.  I would highly recommend sharing a bottle with friends.  Trust me, it will last you the entire evening.

The pour is like that of an imperial stout.  Pretty straight forward.  The head was tight and displayed a very deep brown/espresso hue.  I could not get much color from the brew so I decided it was charcoal black color.  It is not overly viscous actually, but it has deep maple syrup legs when swirled.  Looking at it from afar you would think it was one of Founder’s stouts.

Wow.  If the tradition behind Mephistopheles is true, then why did he not warn me of the hell I was about to put my sense through.  The nose on Meph is like a black hole.  Hands down the deepest, darkest, thickest burnt malt aromas I’ve encountered in any beer.  Huge hints of licorice was the first aroma I received quickly followed by an abrasive alcohol content.  A big charred wood component was there as well it should be.  If you have smelled burnt coffee or opened a fresh bag of ground Black Patent that should get you half of the way to what this smells like.  Uber dark, roasty, some toasty notes.  At 107 IBUs, the hops do make an appearance in the nose a little.

I will say, this was easier to drink than Dogfish Head’s World Wide Stout which was so abrasive it hurt.  Meph does hurt a little, but there are enough hops to give it a more well-rounded approach.  The flavors are so dark.  Go figure.  Raisins, dates, and figs dipped in what tastes like 100% cocoa dark chocolate and then chased with a chocolate covered espresso bean.  The carbonation is good helping to lift some of the thicker malts off the palate, but the abv aids in this as well.  After about 6 sips, my palate gained some traction with regards to picking out various flavors.  The hops are present at the finish lending some bitter resinous relief to the quagmire of licorice and boozy.  Interestingly, there were some sweet notes that lingered in the aftertaste, but for the most part it is utterly astringent.  Huge, bold, deep, dark and sinful Meph is a challenging beer to sample and not for the faint of heart.