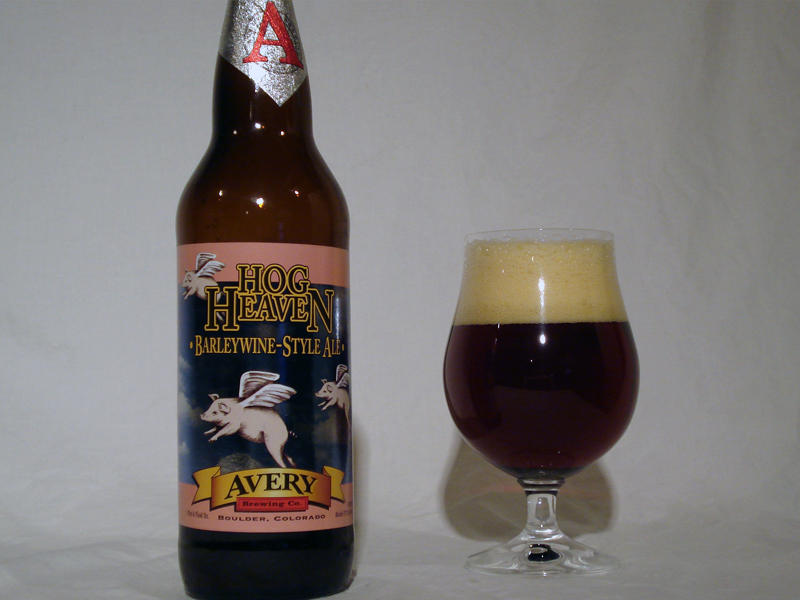 According Adam Avery, Hog Heaven was the beer that helped put his brewery on the map.  Looking at the label one might they they are in for a smoked beer, but don’t be fooled.  The nonsensical name is only a front for this barleywine-style ale.  In a video Adam explains that they called it a Barleywine-style partly because a Double IPA style had not yet come into existance (at least in the BJCP).

The bottle I reviewed is a few years old as Avery has come out with new labels in 2011.  I’m pretty sure I bought this beer in 2009 so two years of aging will have taken a little off the hop profile, but with an aggressive dry hopping I’m hoping some vibrant notes remain.  The pour is pristine.  A very clear burnt red/deep red beer flowed into the glass as a large yellowish head added some support to the appearance (make sure you decant).

The aroma was still hot with alcohol and a pungent hop aroma is lingers.  Aside from that, this beer tip-toed the line of dark and light fruits.  By that I mean the more apricots, peaches, grapes.  Larger notes of caramel and definite toffee filled the air.  Lifting this beer to my lips only confirmed the apricot notes I had smelled.  The mouthfeel is light and finish clean, not to mention caramely and resinous.  Columbus (aka Tomahawk) is an earthy pungent hops and this beer had very woody qualities that almost rivaled that of oak aged IPAs.   When I got to the bottom of this bomber the sediment that has settles over the last couple years gave a more bready mouthfeel.  Since this was dry hopped some of the hop particulates combined to give this beer a similar taste to Mikkeller’s single hop Columbus.

With a few years on this beer it continues to carry big hop and malt vibrancy.  Note:  my last sip brought some cereal notes on the nose, similar to Cheerios multi-grain, and syrupy malt qualities (almost English).   I’d say this is a fine American style barleywine that when drunk fresh might be closer to an Imperial IPA.  I’ll have to drink a fresh bottle and find out.