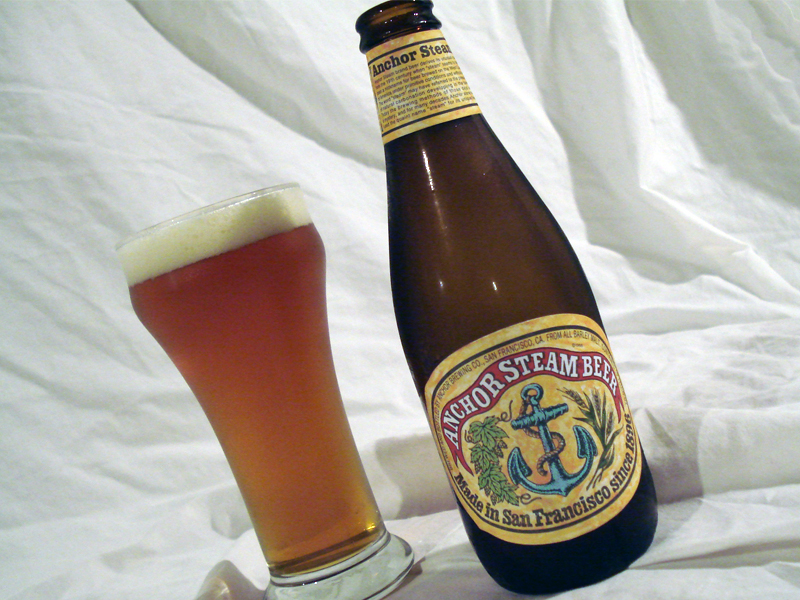 If you are looking for a beer with history and character then pick up a 6pk of Anchor Steam Beer. Known as a California Common, this beer is a lager that is fermented at ale temperatures (60-75˚F). Little has been found as to why this beer was given the name “steam” and there are little to no brewing specifications remaining. Anchor Brewing Company has a registered trademark on the name and is regarded as the only commercial brewery to set the standard for this style. One theory is the use of steam power to brew the beer.  In the mid-1800s before ice and refrigeration were used for lagering purposes, the beer was fermented in large shallow open-air troughs to take advantage of the cooler temperatures in the San Francisco Bay area.

Whether you are a fan of malty or hoppy beers, lagers or ales, this brew will appeal to both. The warmer fermentation temperatures bring out the fruitiness found in ales while the lager yeast lends a classic crisp finish.  Known for being well hopped and malty it offers a wide range of flavors to be enjoyed.

The color is deep, clear copper and complimented by a fluffy white head. The aggressive hopping (typical variety is Northern Brewer) gives the aroma a nice woody, herbal, piney nose.  Moreover, the fruity ale notes bring out a slight citrus spice. The malt profile can stand on its own as I could pick out the the generous caramel and toasted grain highlights.

While you think this beer is going to be relatively bitter or have a heavier mouthfeel, it is surprisingly crisp. There is good carbonation giving the beer a lighter body.  The first thing I noticed was the sweet caramel notes on the front of the tongue. This was balanced by the bittering hops when they hit the back of my palate. This beer was interesting and unique enough to sample several times before making a verdict.  You’ll experience the richer, fruitier ale characteristics as you let the beer warm up while you sip. If you want to enjoy a big bodied lager drink it quicker while it is cold to let the lager qualities shine through. The aftertaste was similar to that of a Red Ale or Dunkel Lager.

Anchor Steam will leave you coming back for more due to its complexity.