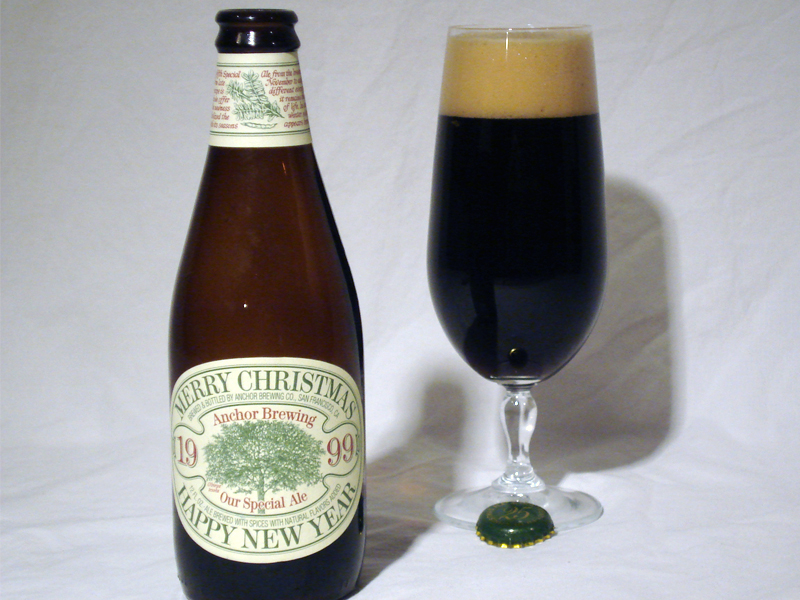 Brewed since 1975 this seasonal Christmas ale (aka Our Special Ale) has become a tradition in and of itself.  The more I’ve learned about this beer, the more I want to add it to my holiday traditions.  There are a few interesting facts surrounding this beer that you must know.

Now that you have some background allow me to introduce to you a vintage that dates back twelve years ago.

The pour is pretty standard.  There is a massive amount of sediment in the bottom that is packed down so you will not have to worry about decanting.  If you have still have a bottle do not swirl it and you’ll be fine.  The color is a deep mahogany with some deep ruby hues intermixed.  The head is somewhat rocky at first, but turns dense and sticks around as you sip.

I was not exactly sure what to expect since the bottle is old and the abv low.  Well, the first thing that caught my nose was soy sauce.  It was harsh on the nose after a swirl in the glass, but pushing through I did notice some deep roasted grain malts.  It smelled vegetal and funky (i.e., it sort of stung my nose).  There were some hints of herbs, but for the most part the aroma did not give me any hope for the taste.

Surprisingly the flavor was not as bad as I thought.  Better malt presence in this stage, but that soy sauce quality come up in the back half of each sip.  It was like drinking a very old Porter that had gone bad.  Perhaps a failed home brew.  After all, the beer had been sitting on a yeast and spice cake in the bottle for 12 years.  The mouthfeel was light and there was still a drying herbal effect in the aftertaste.

In the end, I’d say that if you have a bottle of this laying around open it now as it is not going to get any better. Take a sip (maybe share it), but don’t expect it to be a winner.  I could see this beer being a solid B+ back in 1999.