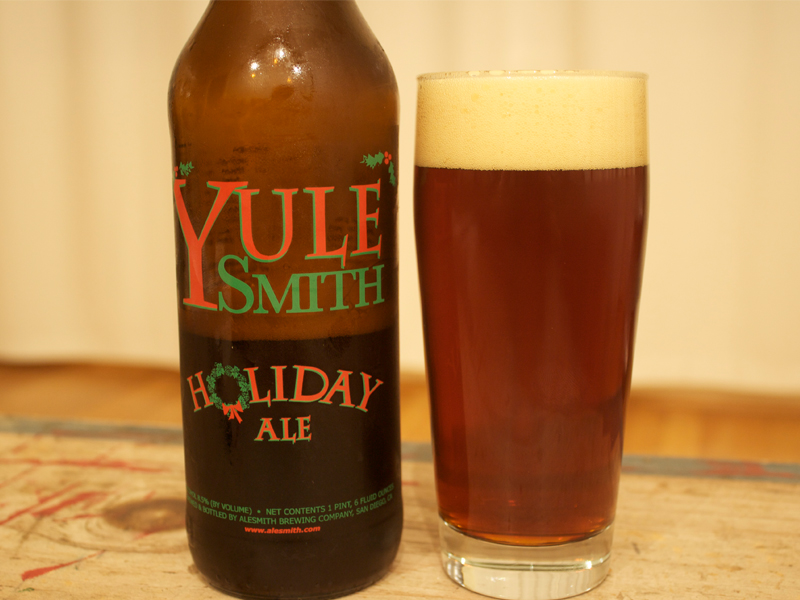 One moment I’m sitting in my living room on a cool, February evening in San Diego and I pop the cap of an Alesmith bomber. I pour.

Immediately I am transported to a pine forest. Lots of resiny pine going on here. Towering, resiny pines. Am I having a stroke? No, I’m having Yulesmith, a winter warmer from Alesmith. It’s a holiday ale as evidenced by the green and red lettering on the bottle. The comments on the back from the brewers alert me to this as well. The holidays have long since passed as we all know, but this beer is still around. And, that’s okay. Very often these holiday type ales can be tucked away for a year or two or even five. Many change as they age. I wasn’t worried I was drinking this a month and a half after Christmas.

As far as taste goes I hope it is pretty obvious by now that the dominant aroma is that of pine. Deep caramel tries to show itself in the nose but is unable to overtake the pine, even by a long shot. The body is a deep red brown. Again, there is caramel (insinuating that there is a certain level of sweetness), there is bitterness, there is fullness.

I probably won’t reach for this one again this season. I am just no longer in the mood for a winter ale. That doesn’t mean that by the time the holidays roll around again later this year I won’t give it another shot. It was good. I must say, however, I don’t know if it was exactly $10 for a 22oz bottle good.