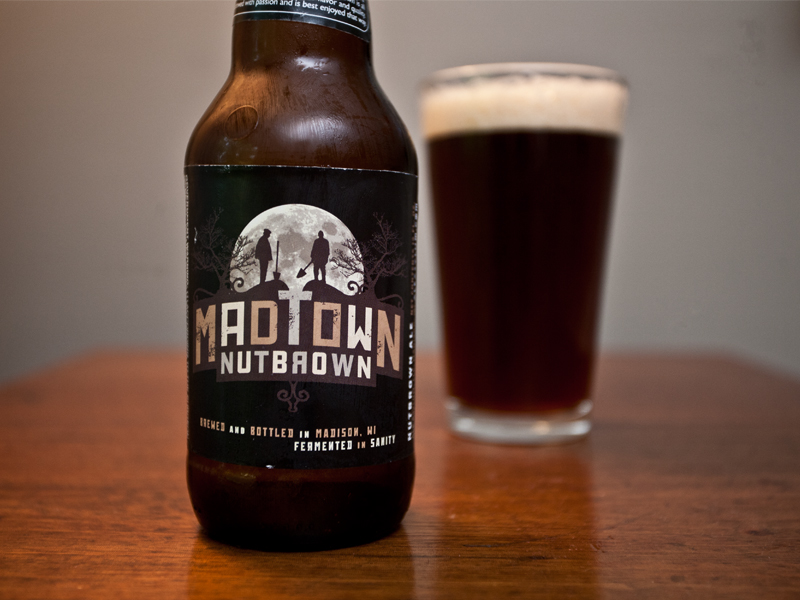 On a recent pilgrimage to Door County, a handful of us stopped to pick up some coveted Ale Asylum beers once we crossed over into Wisconsin. For me, this trip to Discount Liquor in Milwaukee was about two things: Ale Asylum’s Madtown Nutbrown and New Glarus Moon Man Pale Ale. While the latter is a household staple, the former was unknown to me. Until now.

Ale Asylum is a small craft brewery that operates out of Madison, Wisconsin, and brews some pretty great beer. I’m sure all of the U of W students can agree with me on that one. I was captivated by the label on the bottles of their Madtown Nutbrown, which feature a couple of dudes with shovels in what appears to be some sort of nocturnal burial site. Count me in!

This Brown Ale is touted as being quite caramely and sweet, more so than other popular brown ales. Still, I feel that this is a style that has lots of variety in taste so it’s hard to know exactly what to expect. My Madtown Nutbrown poured a silky dark brown into my pint tumbler, and developed only a 2-ish finger head, vigorously poured. The nose … well, was awesome. So sweet and malty, I smelled a lot of caramel and nutty, biscuity aromas. The head dissipated to almost nothing over the course of a couple of minutes.

Loved the taste! This beer is indeed sweet: malty, a little undercarbonated, and bursting with chocolate and caramel notes. I commented to my wife that it almost reminded me of chocolate milk: it has a velvetyness to it, if I can say that. And wow … super duper sweet. It was very quenchable, which means it was still balanced, though I don’t think I ever stopped to think about hops at all while drinking it. Hopefully the folks over at Ale Asylum can weigh in on the ingredients used. They use 7 different malts in this beer, and I’m sure we’d all benefit from getting a glimpse at the grain bill.

Regardless, this is a beer I wish was available in Chicagoland. It looks, smells, and tastes great, and does an excellent job boldly embodying the Nut Brown style. Nice work Ale Asylum!