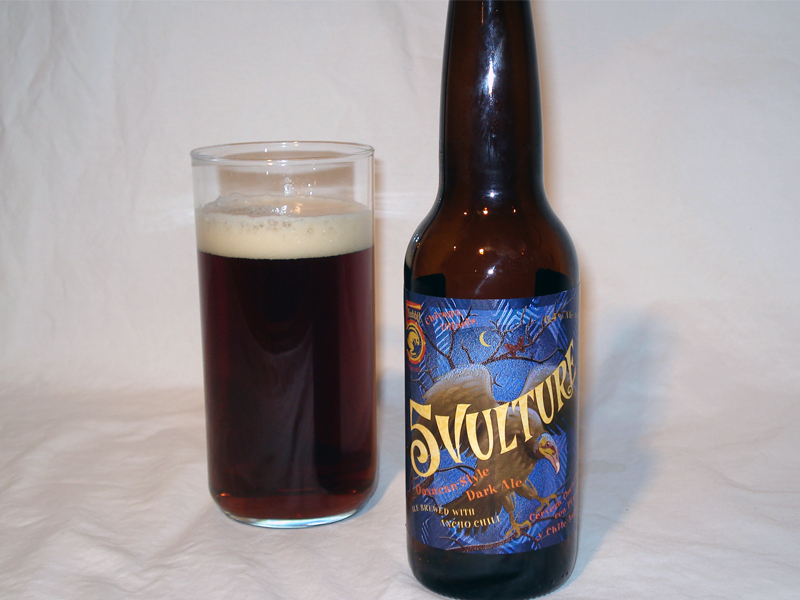 My first full beer from this new brewery finds me sipping on an interesting concoction.  This dark ale is brewed with ancho chilies (dried poblano) and made in the Oaxacam-style (a region in the Southern Pacific side of Mexico).  While I’m not completely sure about the history behind this brew I can say that it reminds me of a Brown and Amber Ale with a touch of Vienna Lager.

When I poured the contents it looked very close to an Amber Ale or light colored Brown Ale.  The head was thin and beige and dissipated quickly.  The beer was clear and displayed some great Fall colors.  Behind that it was all aroma.

This aroma was laced with molasses, brown sugar, toffee, caramel, toasty bready notes, and spicy.  Just like the bottle suggested, the chilies gave a nice kick to the aroma without adding “heat or strong chile flavor.”  It paired well with the deeper malt profile adding a little life to the party.  While the color made this beer seem like it was going to be an Amber ale…the aroma suggested a deeper Brown ale.

Interesting!?! That was the first thing I thought after my initial sip.  The chilies were noticeable, but not overpowering dancing delicately in between the smooth malt notes.  Forward hints of caramel and brown sugar lap over the tongue lending a very sessionable quality to this brew.  I found that as I progressed to the back half of this sip, the chilies presented themselves.  Mini darts pricked my palate every so slightly which were then relieved by the sugary malt flavors.  The aftertaste is highlighted by a full salvo of chilies right away and then mellows into a brown sugar, caramel, almost mole flavor.  I really enjoyed this brew and found it to be rather unique.  It reminded me a little of New Holland’s El Mole Ocho beer.

The brewing is hired out to Argus Brewery which is also located in Chicago, IL.